A good pizza is something that can always bring the family together after a long hard work week. However, getting an authentic, high-quality pizza made at home with a conventional oven is almost impossible and will often leave you with off-the-shelf frozen pizza options that just don’t quite scratch that itch for everyone. For those of us who enjoy a nice homemade pizza, a wood-fired oven is quite possibly the best way to go. However, the real-estate and up-front cost of a genuine wood-fired pizza oven is something that many of us just don’t have the time or the funds to afford with most kits and options out there costing a couple of thousand dollars and also taking up a ton of space. Solo Stove recently released a brand new option for those who want the wood-oven experience without all the drawbacks of a true-to-form wood-fired pizza oven – the Solo Stove Pi. This stainless steel contraption takes all the great benefits of a traditional wood-fired pizza oven and crams it into a compact, and more affordable unit that can turn any evening on the patio into a great pizza night for everyone. Let’s take a look at it and how well it performs! 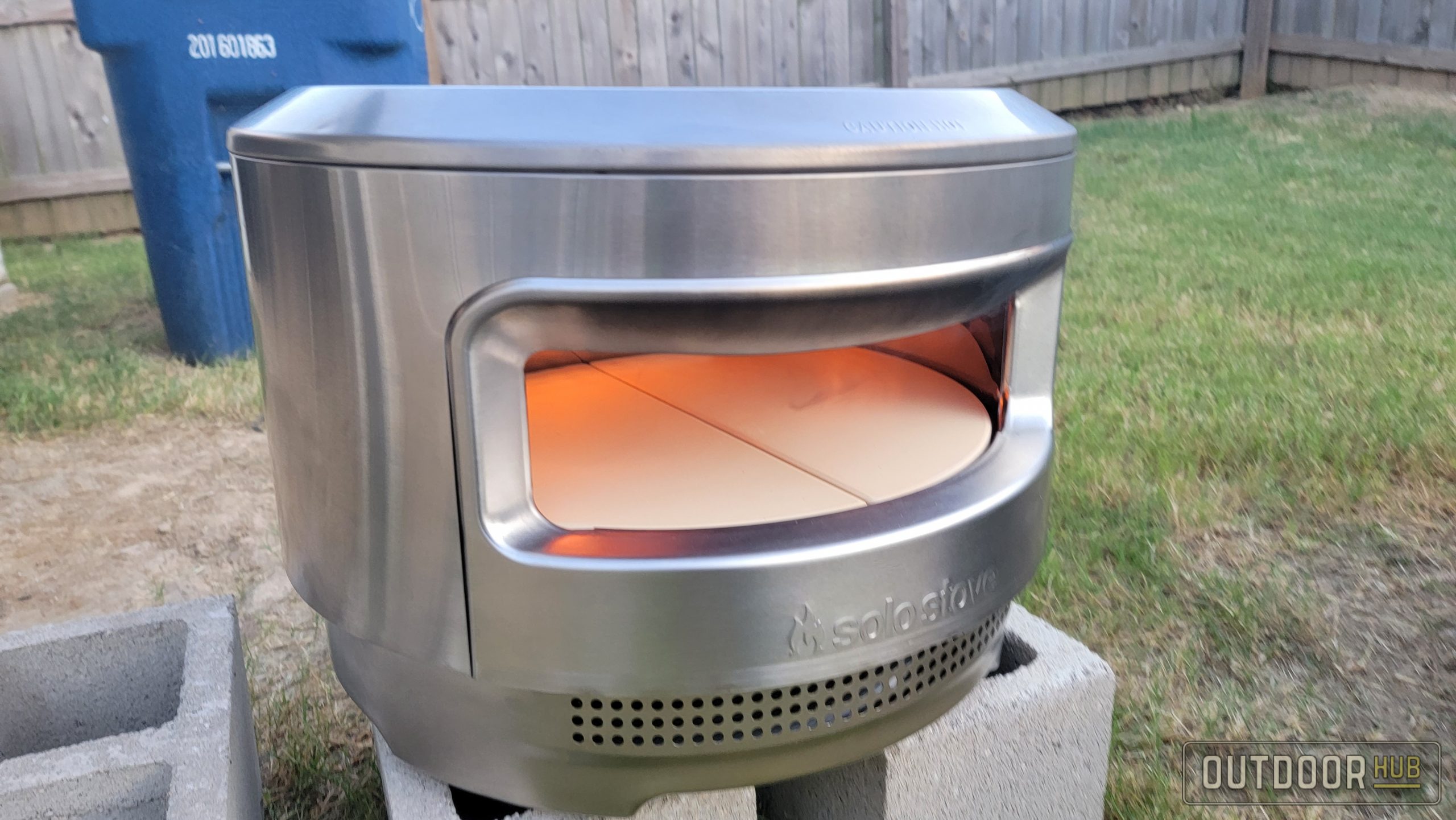 The Solo Stove Pi is a deceptively elegant piece of backyard machinery. In case it is hard to get a sense of the scale of things the Solo Stove Pi is about two feet wide and a foot and a half tall and weighs 30 pounds with both of the pizza stones inserted. The stainless steel exterior is a great feature and you’ll see why later on in this review. The best feature in my opinion is the Pi’s ability to be able to be used as either a traditionally fueled pizza oven (using wood) or with a more efficient and clean burning propane attachment. 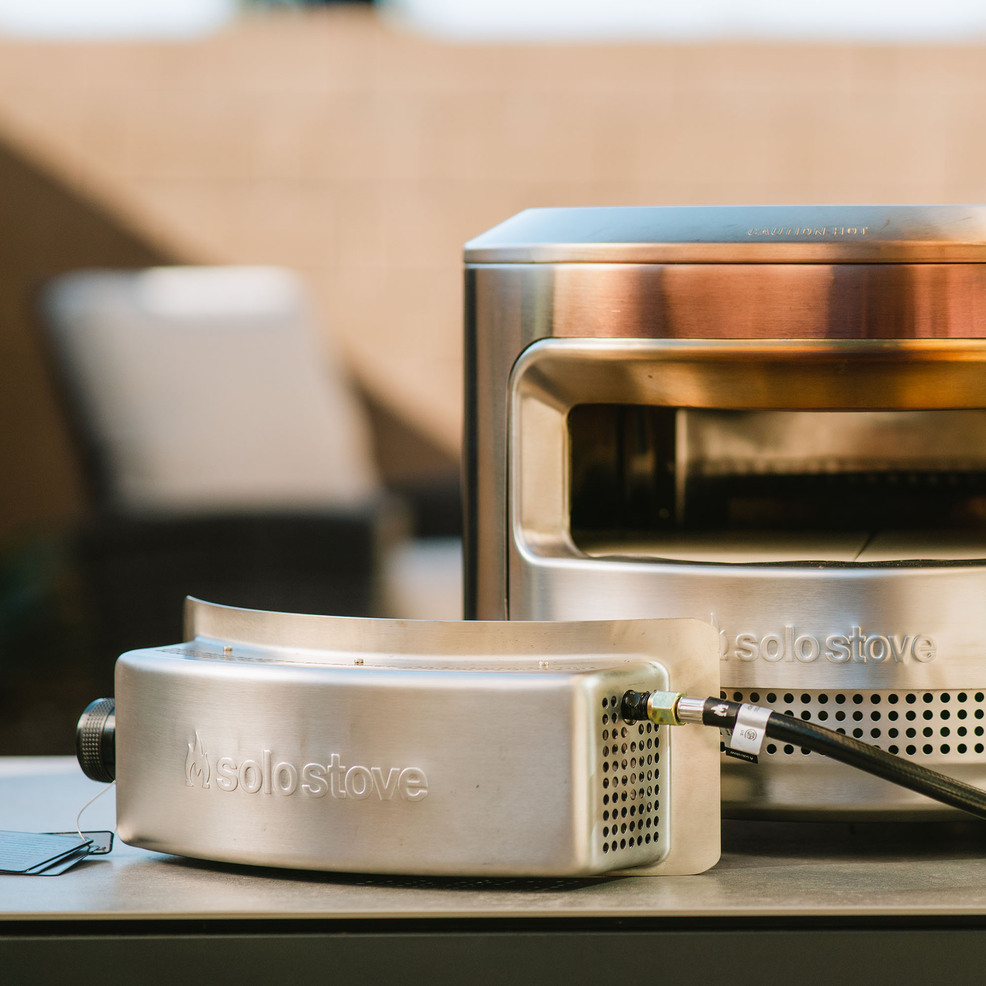 Don’t have all the pizza gear? Solo Stove also sells all the extra tools you’ll need in order to tackle making pizza right in your own backyard. This includes a full suite of pizza-specific tools including pizza peels, turners, cutters, a thermometer, and even a cover similar to a grill cover. For a full setup including the additional gas burner adapter, you’re looking at about $850 when all is said in done – similar to what you’d expect to pay for a propane grill but still far under what you’d end up paying for a full-size wood-fired pizza oven.

The Pi pizza oven is quick and easy to set up. The unit I was sent came in the same retail packaging you’d expect to find at the store and inside of the box it contained nearly everything that was needed to get the pizza oven going. Due to a combination of weather and scheduling issues, I was only able to try out the wood-fueled features which is the base configuration that the oven comes in. After putting some stainless steel polish on the external casing of the oven, and inserting the two pizza stones into the oven, I filled the fuel crucible up with as much hickory as I could fit and set it alight. 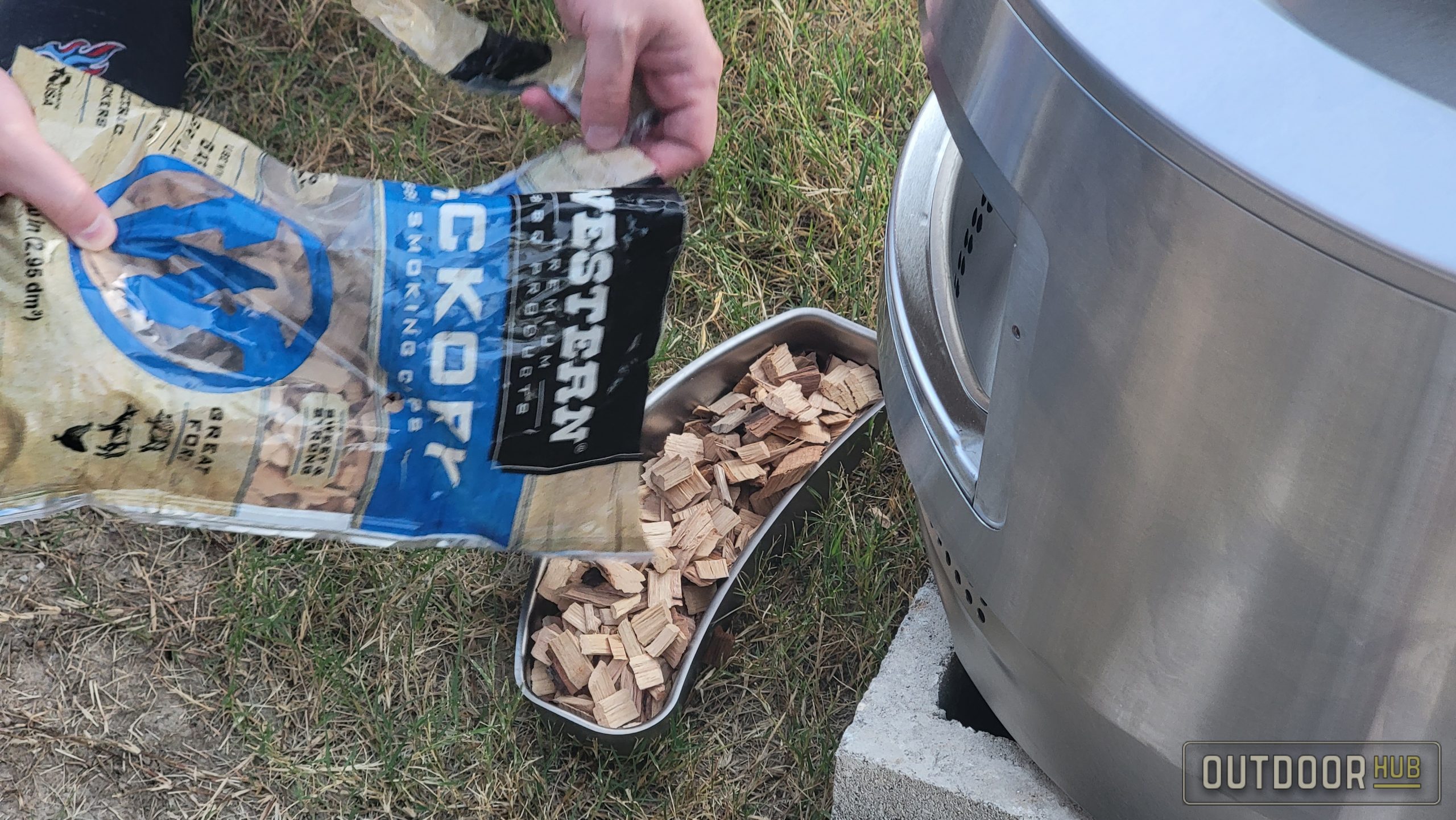 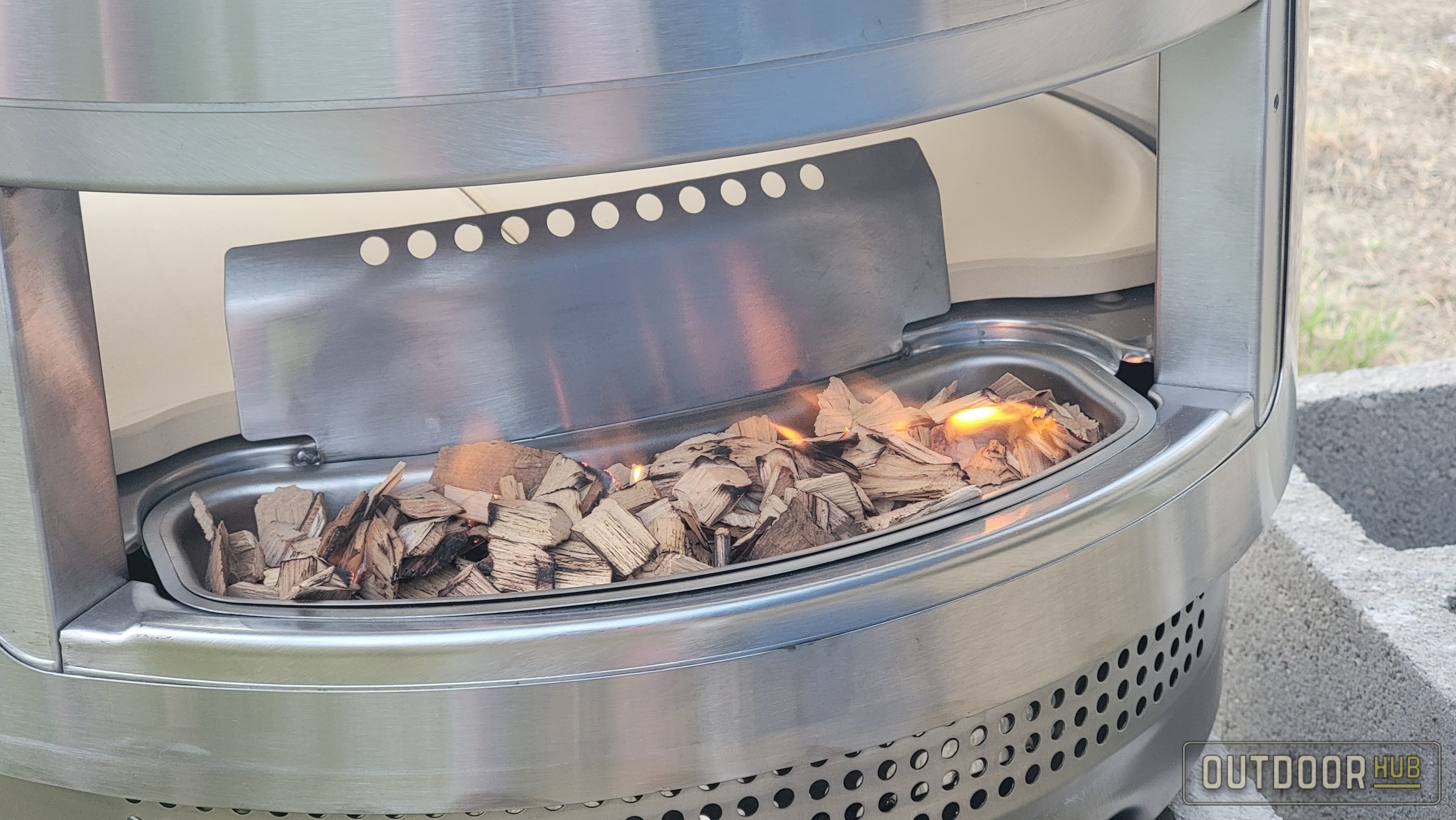 It’s worth mentioning here that Solo Stove sells its own brand of wood and fire starters that you can try out. However, I found it just as simple to purchase wood chips from the store and light them with a normal lighter. As soon as I was confident that the wood chips had started to burn on their own, I replaced the back cover using the included handle and prepped my pizzas. 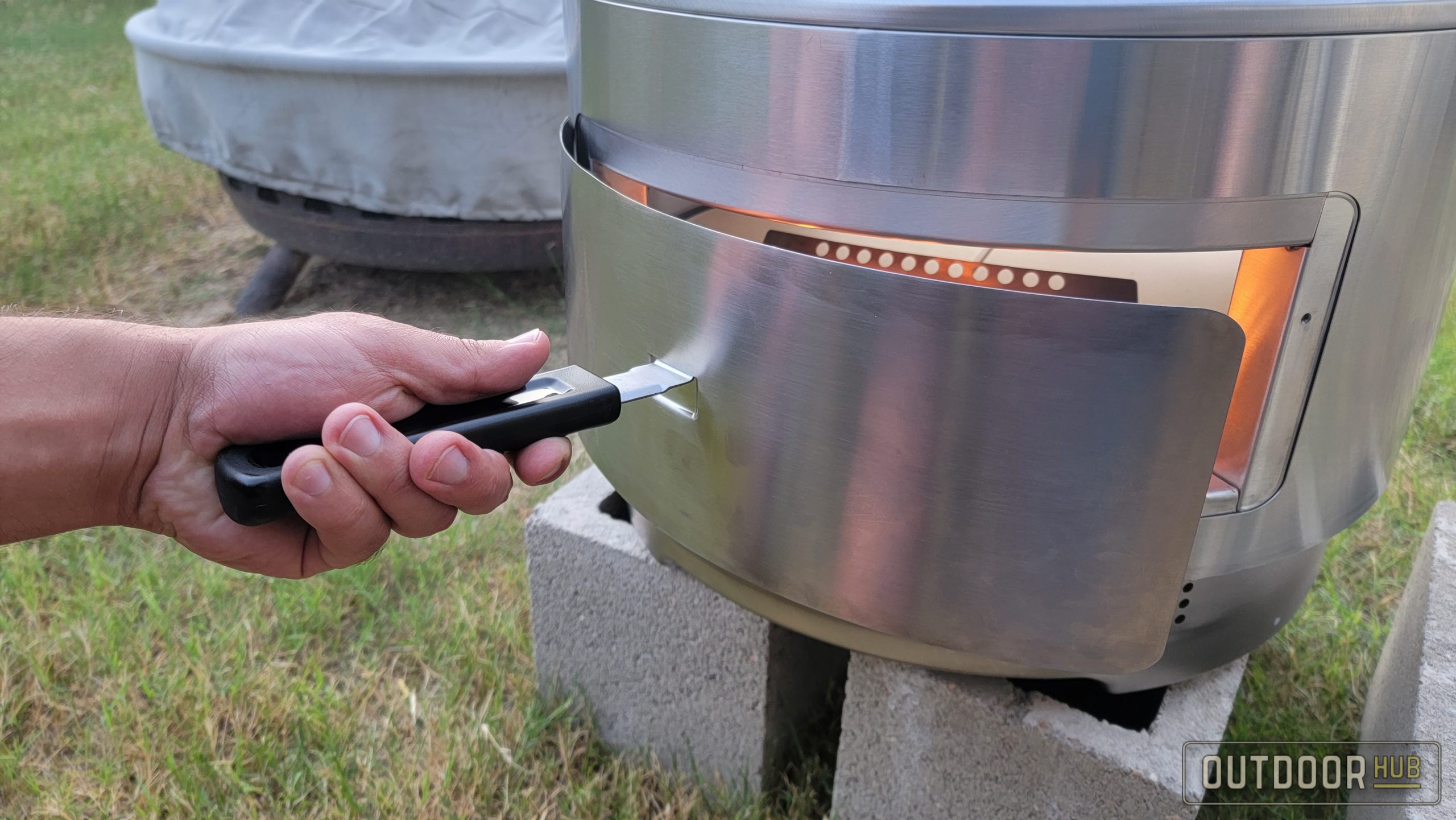 I wanted the pizzas to be convenient so I went ahead and purchased a roll of Pillsbury classic crust pizza doughs from the grocery store, some pizza sauce, pepperoni, and some fresh mozzarella. I learned from a friend of mine that buying the pre-shredded cheeses can lead to sub-optimal results within a brick wood-fired oven as there are preservatives on the outside of the shredded cheese that keeps them from melting properly. It took me and a buddy of mine about 10 minutes or so to prep both the pizzas and by then the oven was burning at the specified 650 degrees or so needed to start baking. Solo Stove provided one of their laser thermometers for keeping tabs on the surface temperature of the stones. 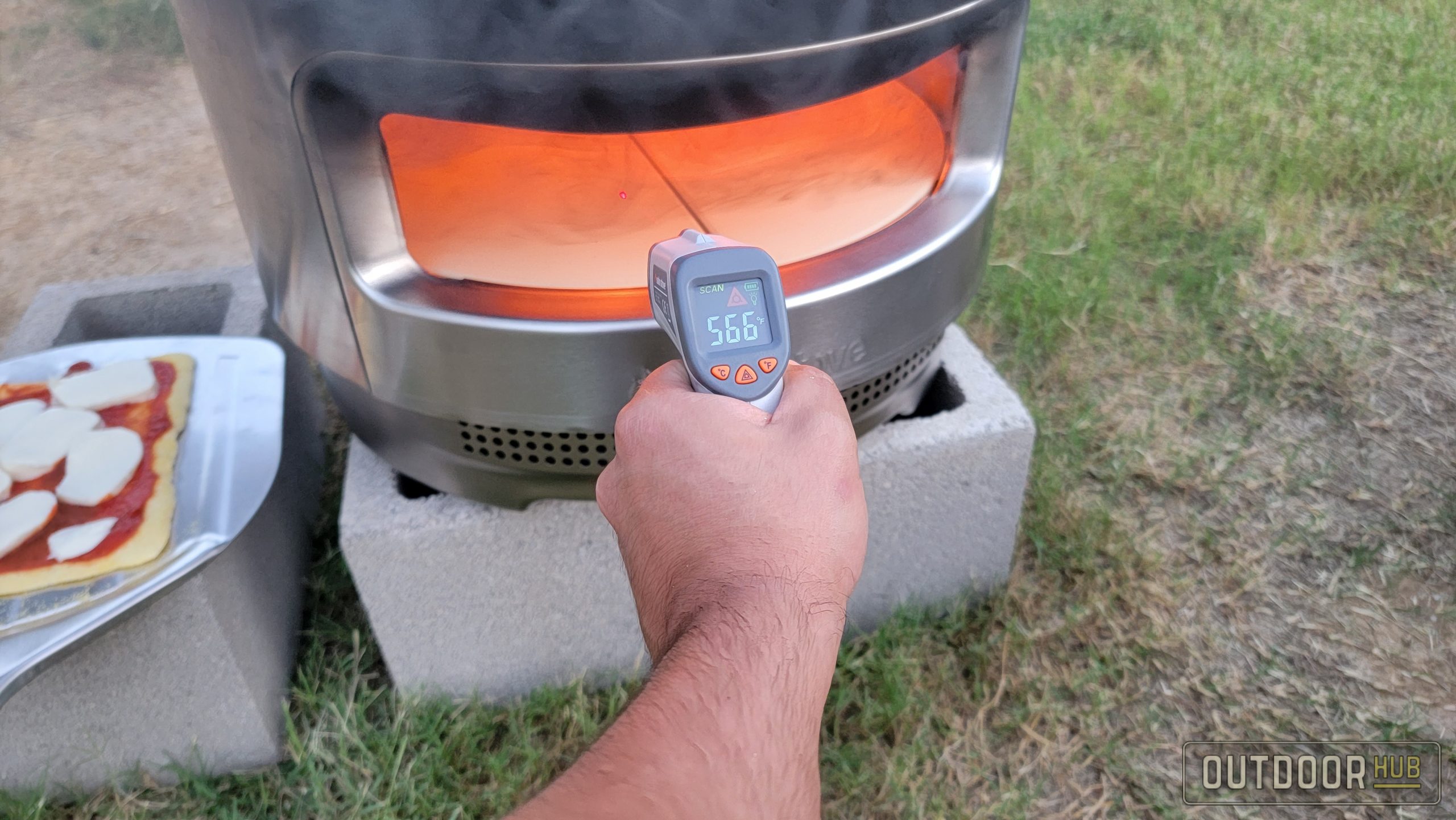 It’s worth noting that the wood-burning oven will produce a lot of smoke during the initial heating process and also when more fuel is added, this lead to a lot of soot buildup near the opening of the oven but due to the stainless steel construction, it wiped off with just a wet rag without leaving any permanent discoloration. With the oven heated, it was time to wait for the pizzas to cook. 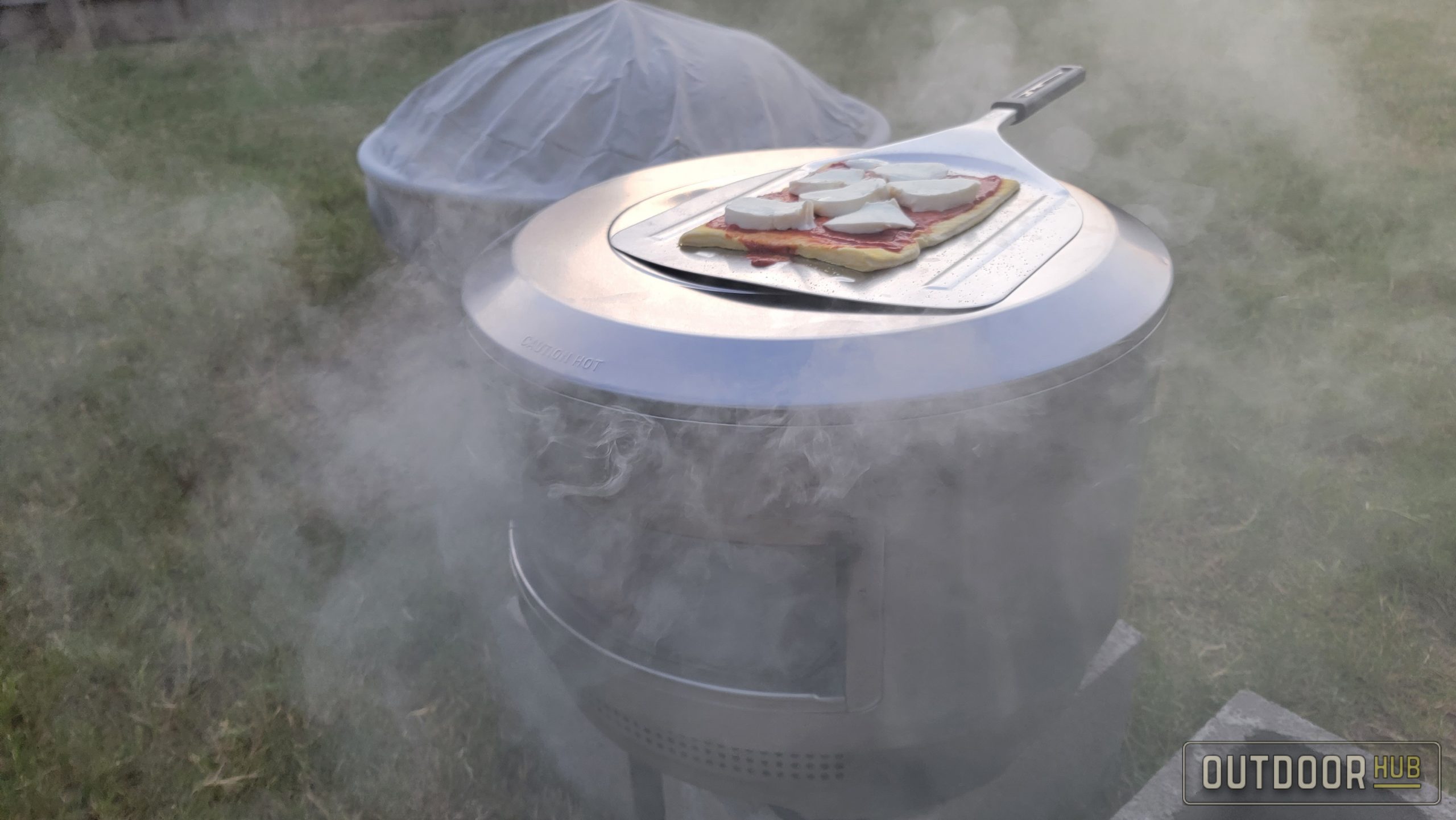 Fast Pizza on the Porch

Store-bought pizzas generally take anywhere from 15 to 30 minutes to bake in a conventional oven. The wood-fired Solo Stove Pi cooked my roughly 10×12″ square pizzas in about 5-10 minutes and this is with the pizzas not even approaching the maximum width of the oven’s opening. Solo Stove provided a pizza peel which I prepped the pizzas on using some corn meal to ensure a smooth transition from the peel to the stones and the provided pizza turner (a much smaller peel in essence) allowed me to turn the pizzas individually to make sure that all sides were cleaned thoroughly and to my liking. 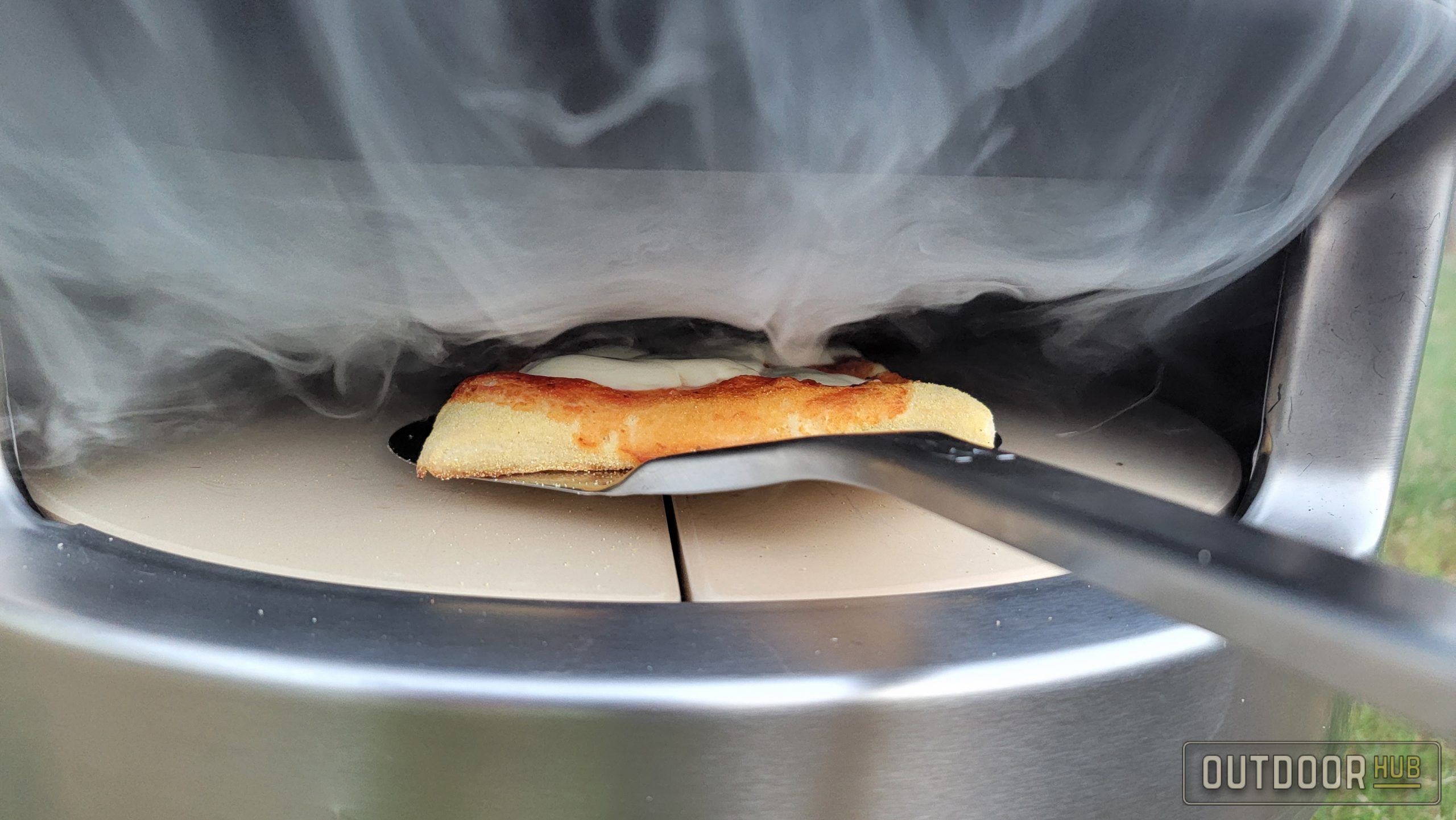 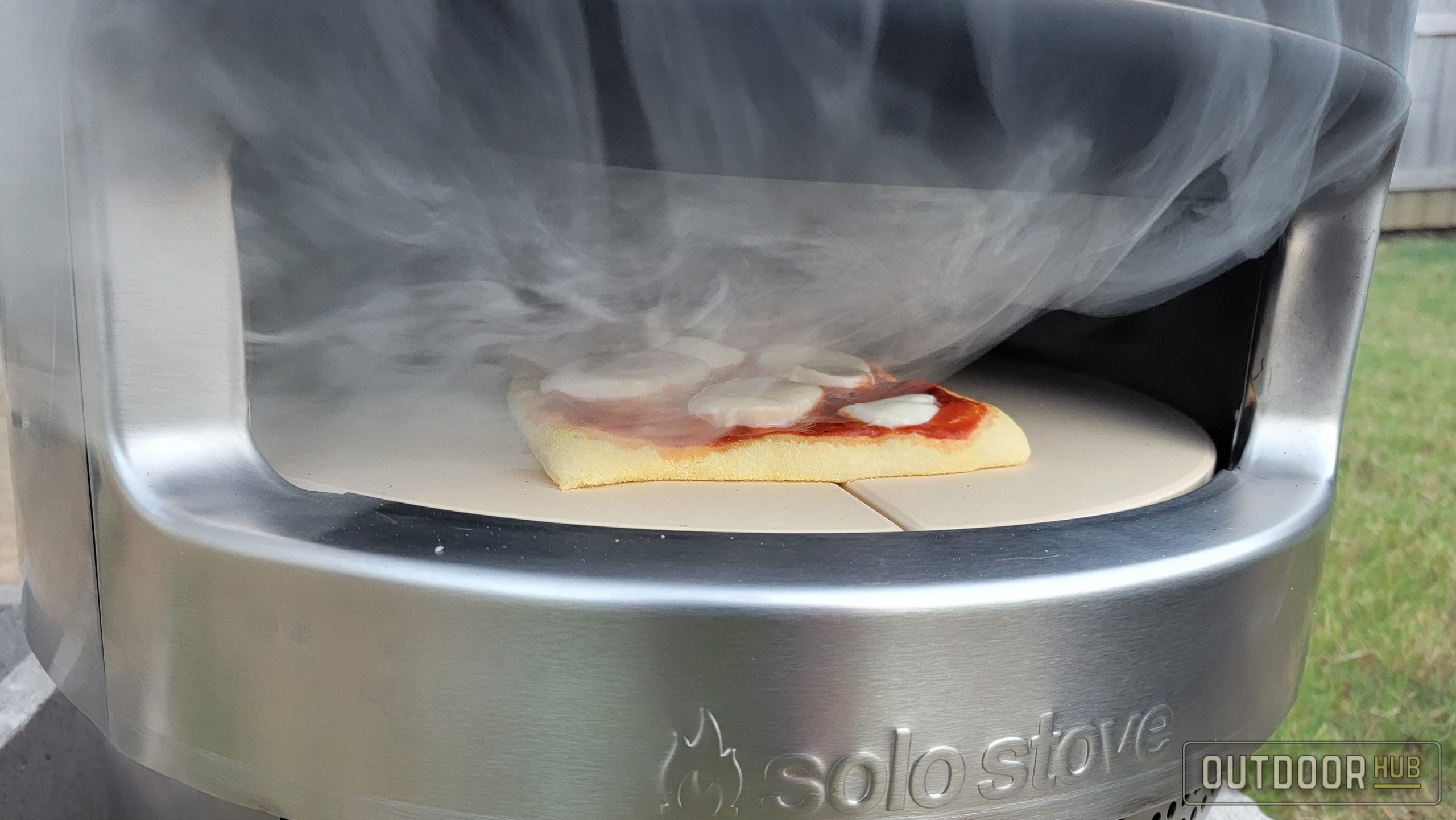 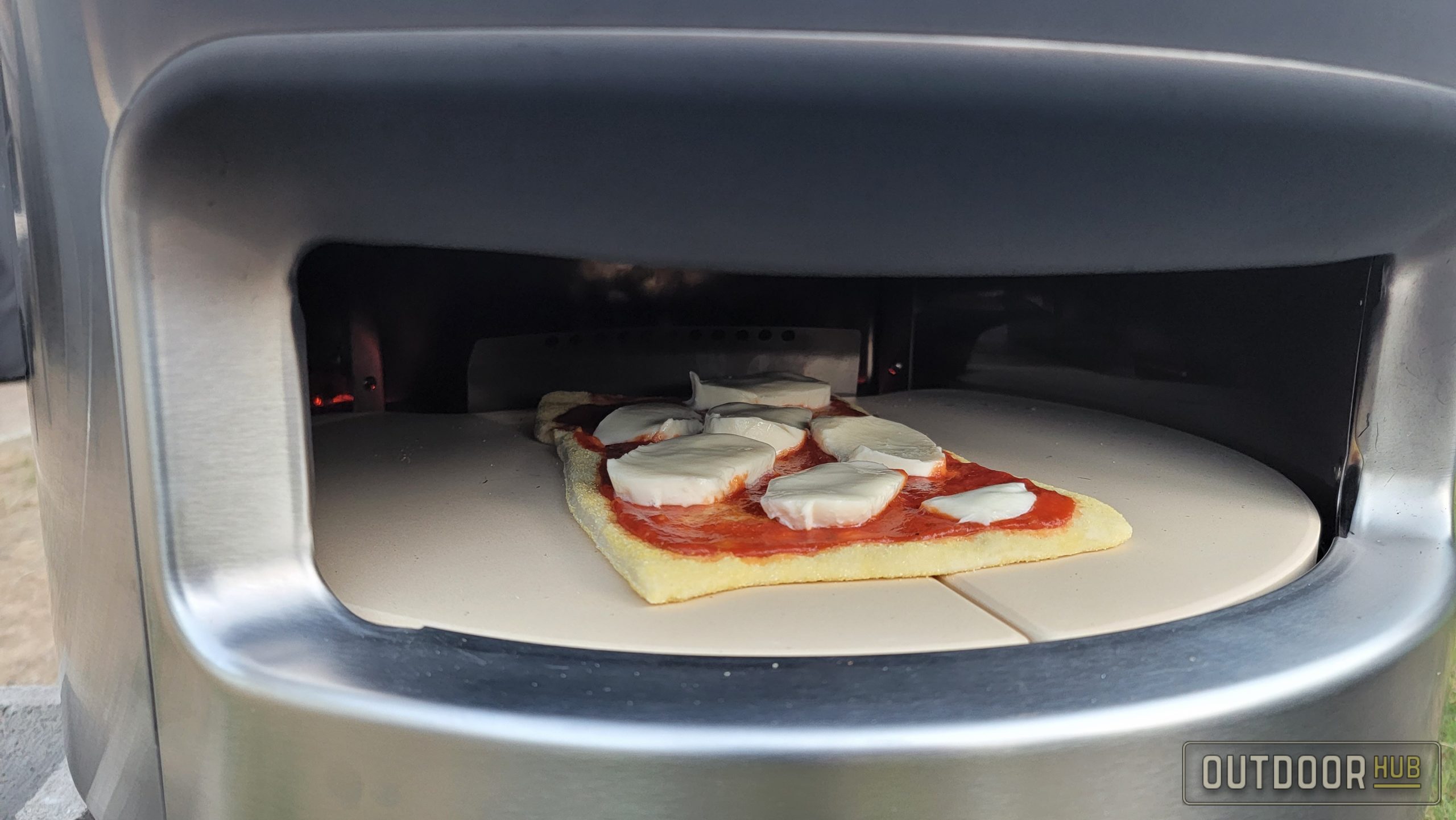 Using wood does come with its downsides, it burns through its tiny fuel reservoir quite quickly and I found that I had to add more fuel by the time the first pizza was done to bring the temperature back up into the 600°F range. With as many accessories that were provided, including a stoker for the fuel, I find it a tiny bit baffling that Solo Stove hasn’t come out with a fuel scoop or something that would allow you to feed wood chips into the fuel crucible. However, I made do by just quickly and gently tossing wood into the fuel compartment and replacing the insulated back cover after some careful stoking. 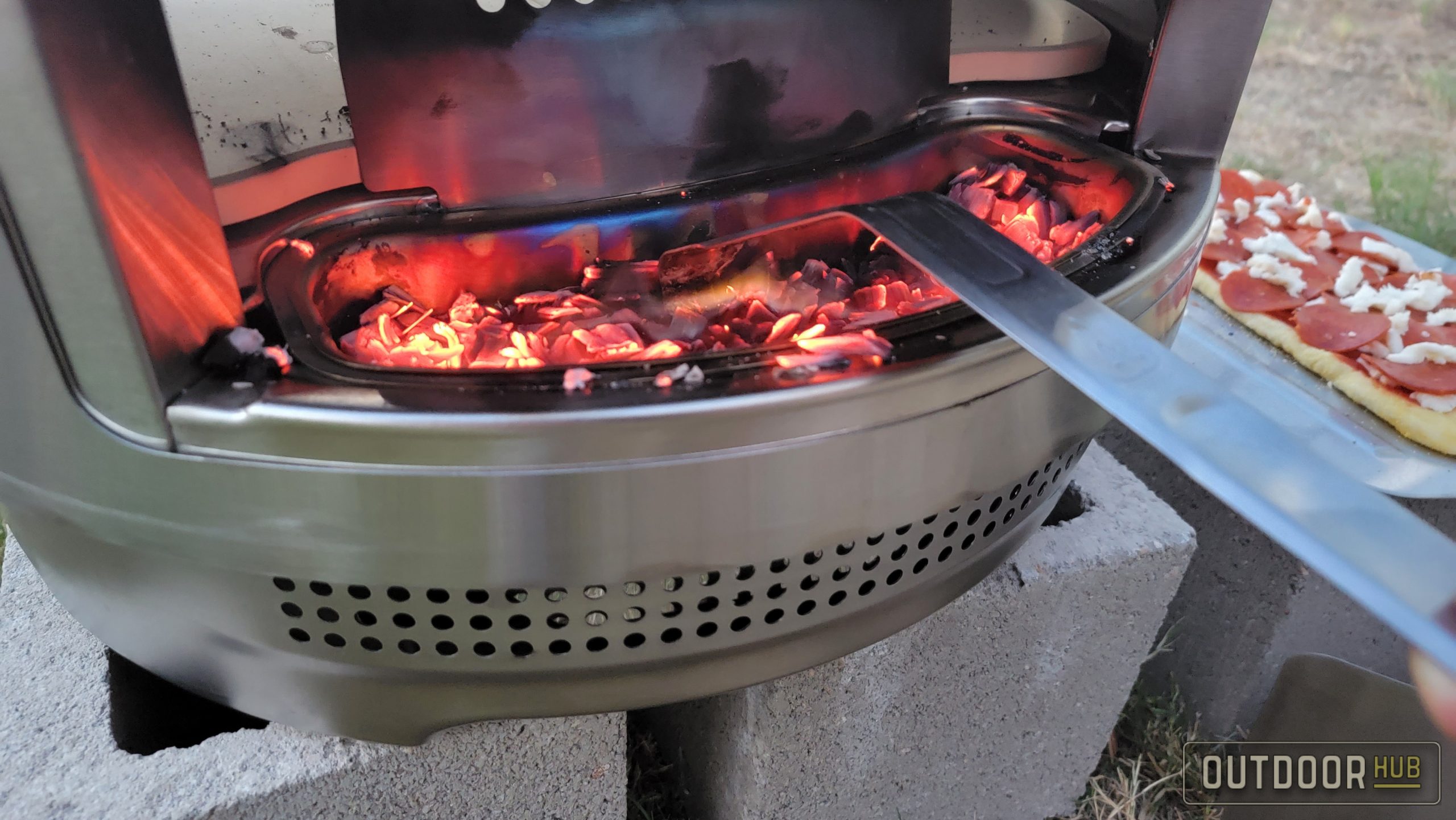 For the second pizza, I added a nice uniform layer of pepperoni and a bit of leftover mozzarella both underneath and on top to see if the oven could cook through all of that in a manageable timeframe. The addition of extra toppings didn’t add any noticeable cook time that I observed and the pepperoni was cooked all the way through and the cheese also started to take on a nice flavorful brown infused with hickory. 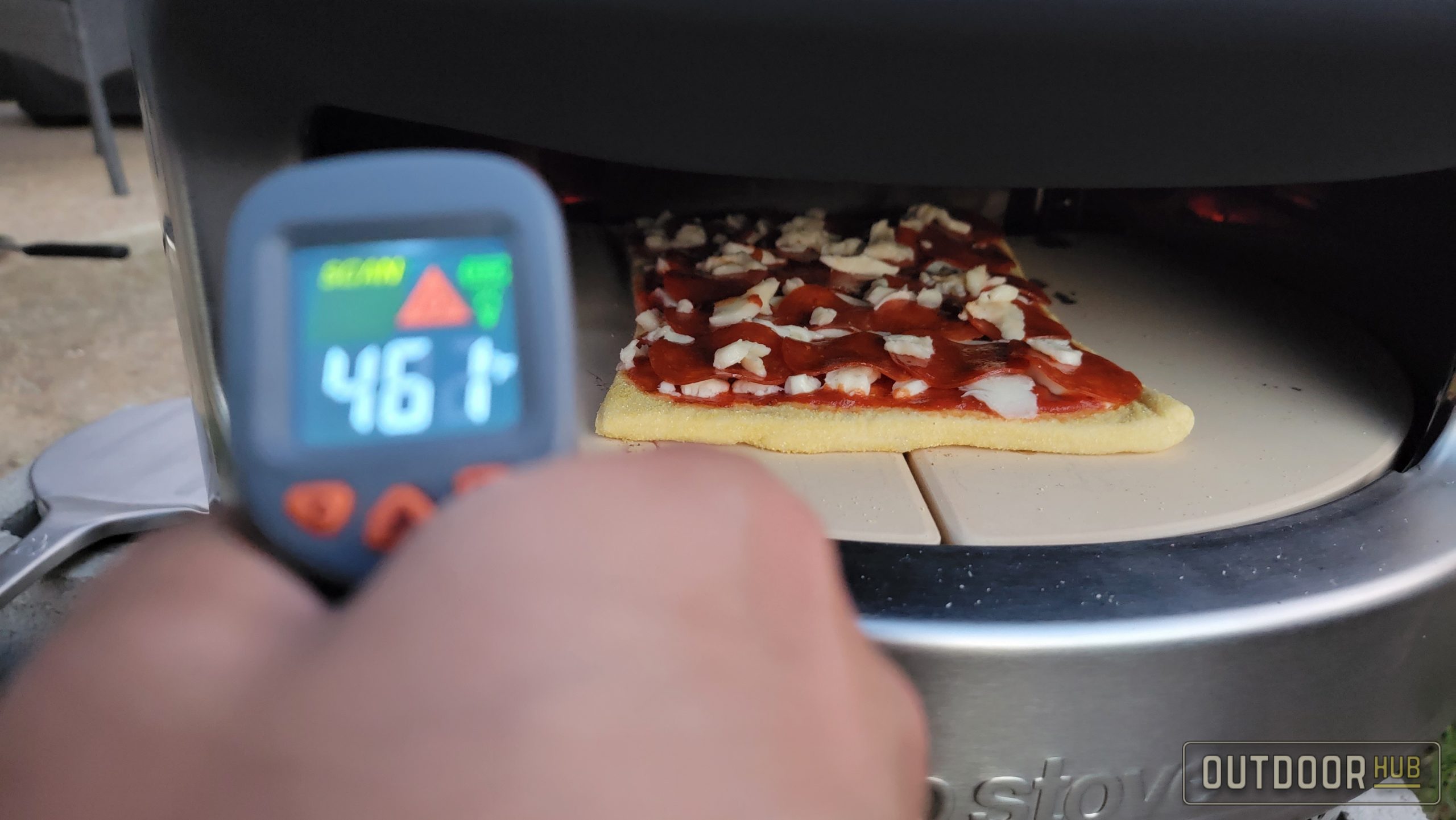 I’d call this a success! Both my friend, his wife, and I thoroughly enjoyed our pizzas and beer on a calm night in the backyard. With as many options as there are there in terms of seasoned wood, there are many possible flavor combinations you can have to give you, your friends, and your family a great pizza night that doesn’t involve spending a ton of money at a restaurant . 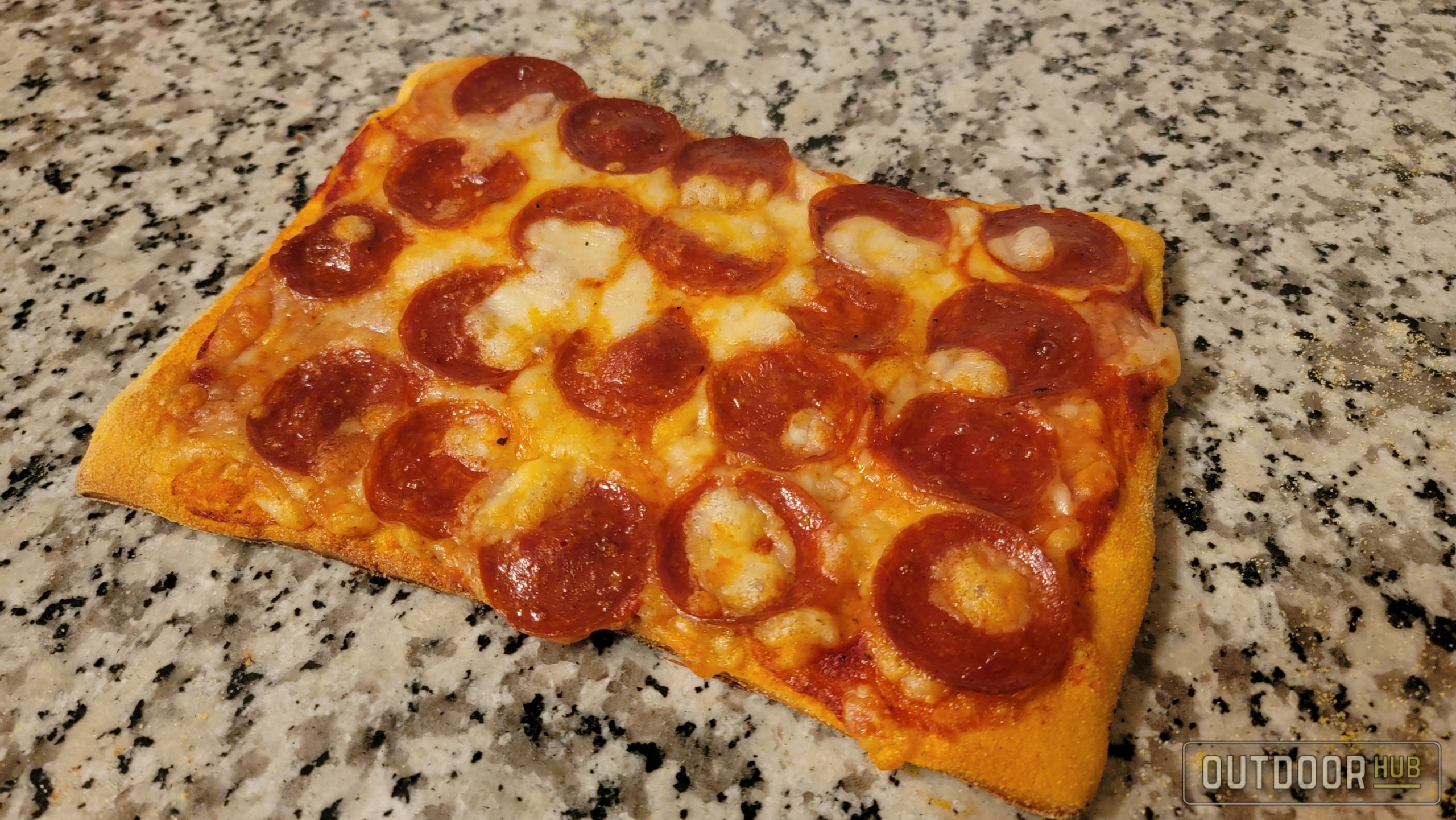 After both pizzas were done, we ate, drank, and sat around waiting for the oven to cool down which took quite a while. I found that the oven hovers at around 400 degrees for quite a while before starting to cool down – a testament to its great insulative properties that should give you time to keep cooking all evenings with your leftover ingredients. 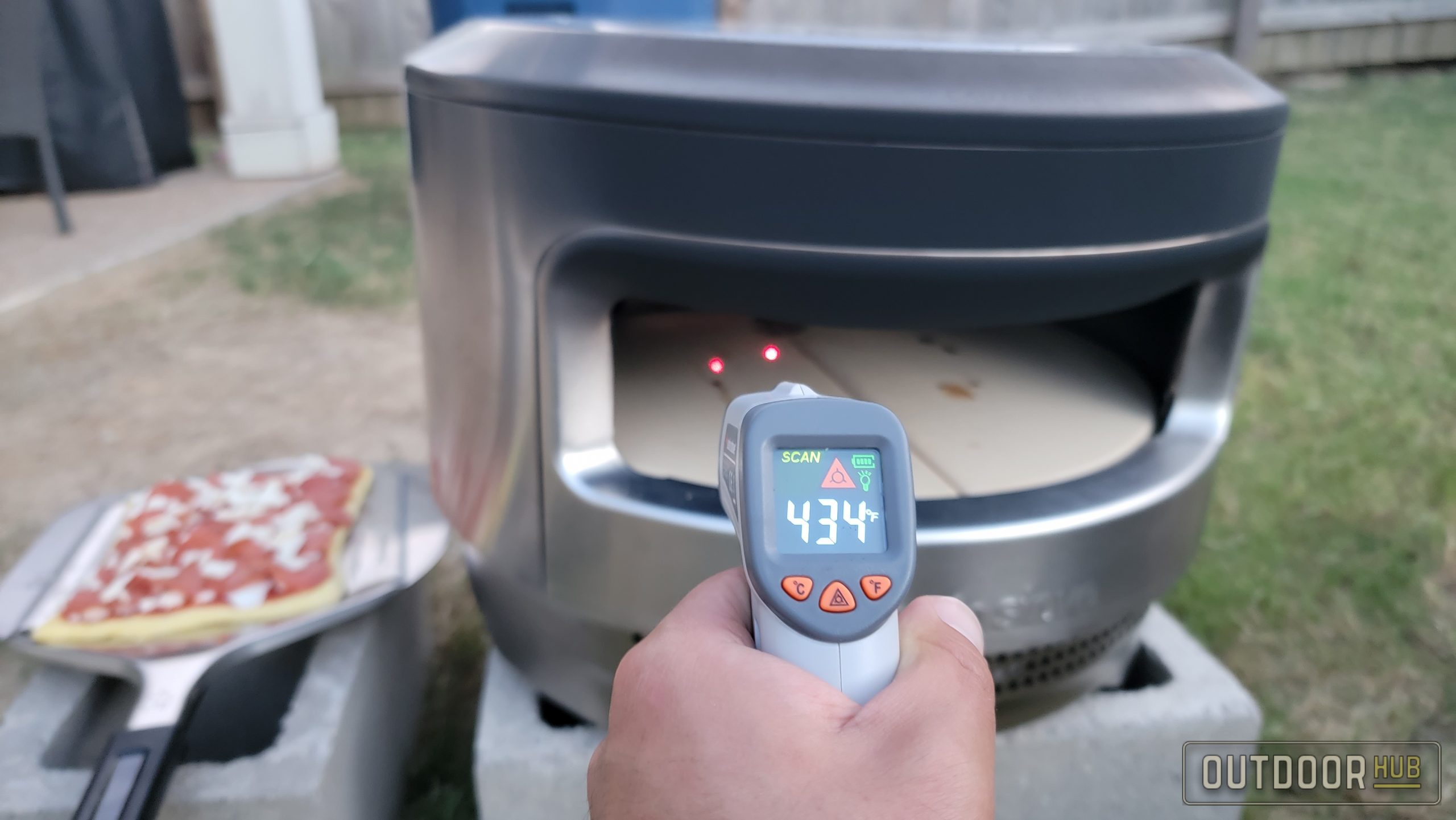 I would assume that the propane option would have been both faster, and less dirty but it would also lack the distinct hickory flavoring that I picked for my pizzas. If you’re someone who really isn’t into smoking their meats or food, this may be a better option for you and it also does save a bit of time on both the heat-up and cleanup portions as I’d surmise propane doesn’t ‘t produce nearly as much smoke that will dirty up the oven. Solo Stove includes a Type-1 fitting which is suitable for 20-lb propane tanks or other tanks that feature this fitting. I had a 1″-20 adapter to see if the oven could be used with a small 1-lb propane tank but due to weather considerations, this wasn’t possible. 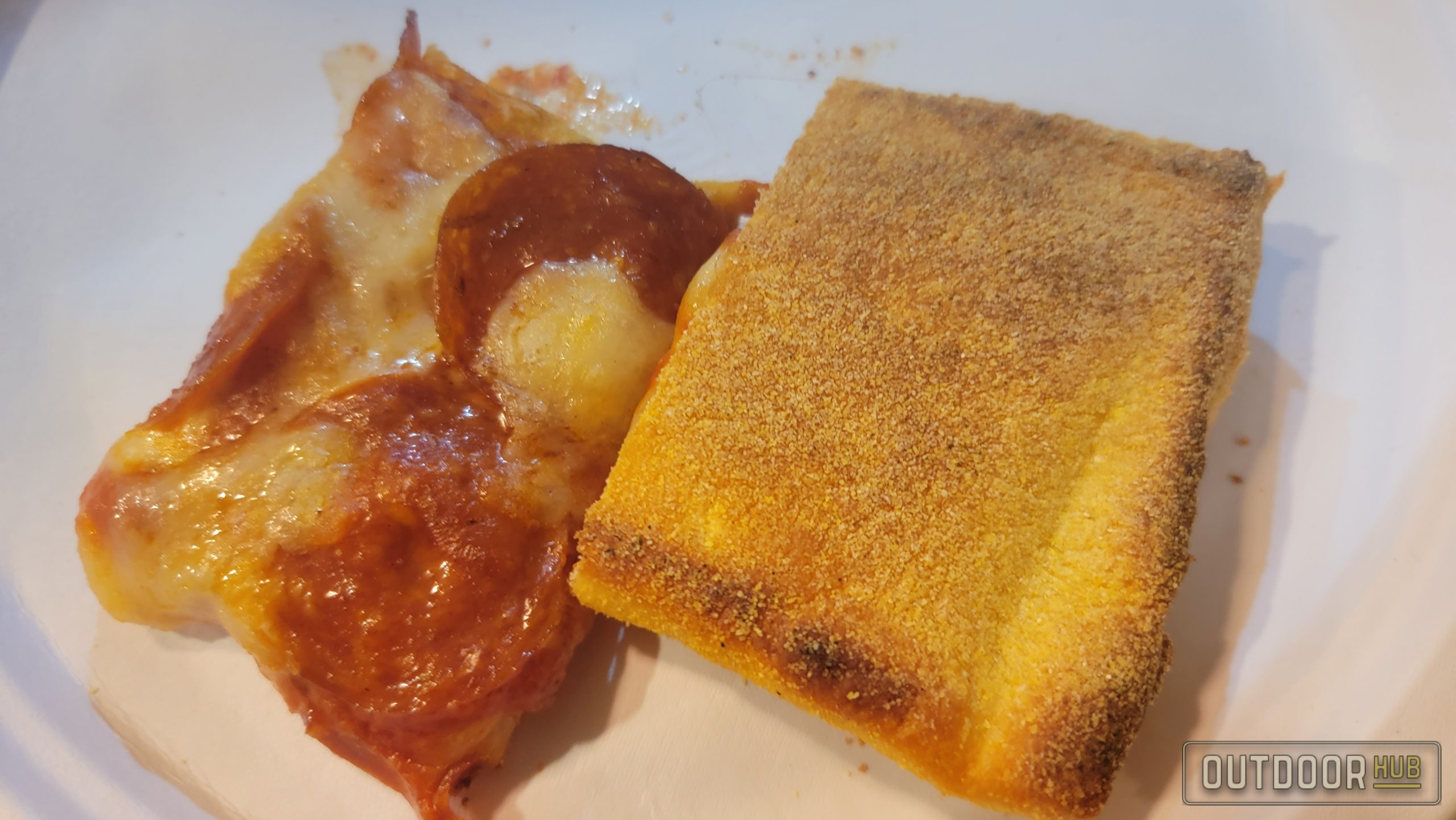 So who is the Solo Stove Pi for? Well if your family really isn’t the grilling type then I think this nice patio accessory is the perfect way to spice up pizza night at home or when out in the RV. I think having the option for both wood and propane fuel is a neat concept and something that I think those who like to camp or RV in style might like to bring along with them for a fun dinner outside of what most people would consider being “camp ” food. The Solo Stove Pi might not be the most portable thing, but it sure does rival and in some respects outperforms traditional pizza ovens.

If you already have a grill, you could possibly purchase your own pizza stone and try things on your own grill but I would expect your cook times, and results to be a bit different. The Unique design of the Solo Stove Pi draws air in from the outside of the oven and circulates it over and around the pizza stones to provide a mostly uniform and fast cooking environment which I think would undoubtedly beat out your traditional propane grill. 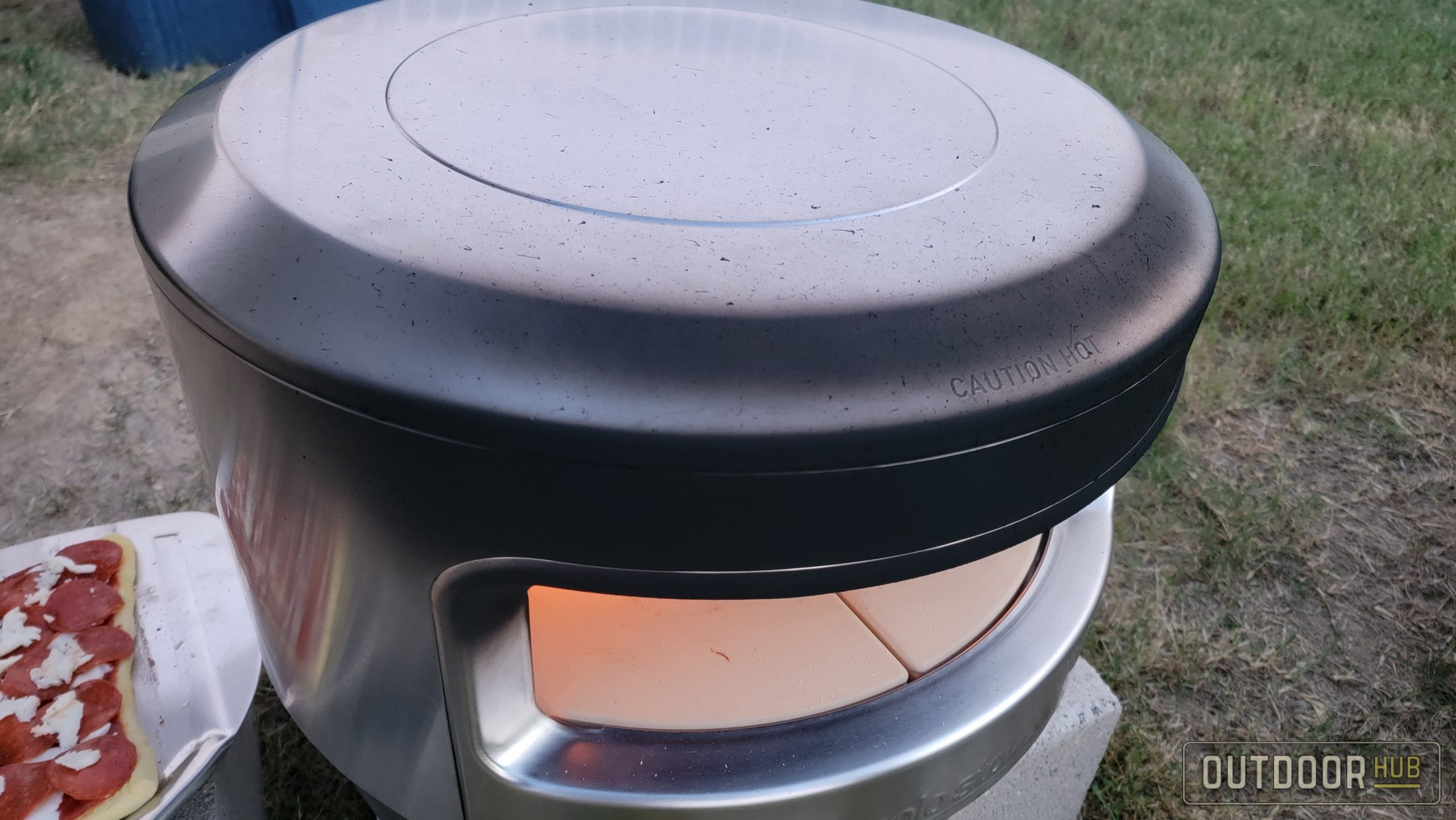 If you’re interested in being able to make pizza in your backyard and like the idea of ​​having a wood-fired pizza oven without having one take up permanent space, I think the Solo Stove Pi is a solid buy. At just a touch under $600 for a base model, you should be able to start making and perfecting your homemade wood-fired pizzas with the whole family. I think the process and the enjoyment I’ve gotten out of the Pi oven allow me to safely recommend it to enthusiastic yard partiers who love pizza. 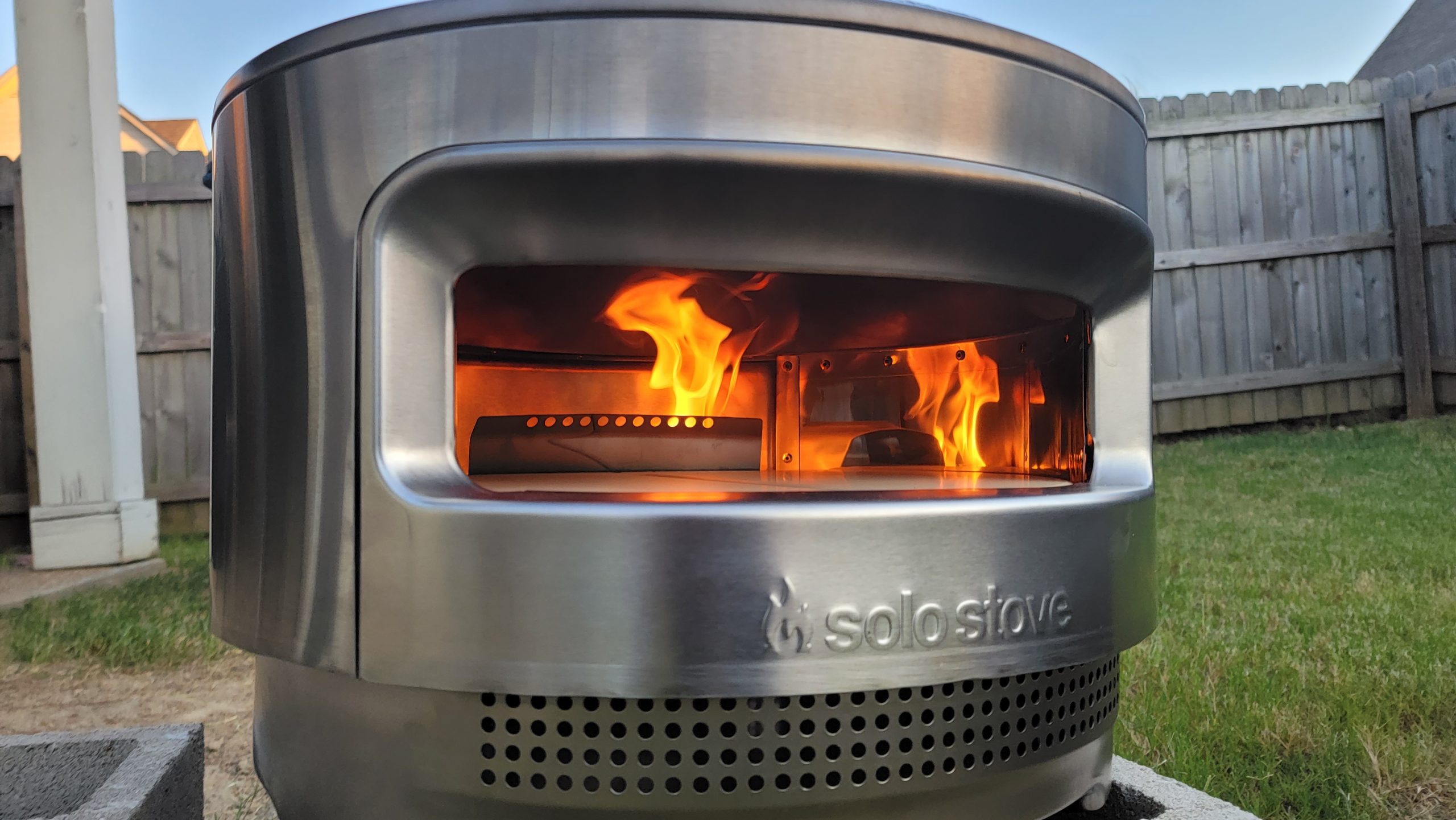