Photographer Andy Woo captured the perfect moment of an osprey gliding on the surface of a body of water, an unusual and spectacular photo of the wild raptor.

The photo was captured in August of 2020 and is one of the more popular photos Woo has shared on his Instagram. He says that the photo of the osprey was complete occurrencetance and he wasn’t even trying to photograph the species of raptor that day. Instead, his goal was green heron.

“This shot was as unplanned as it gets. During the summer of 2020, with COVID lockdowns and work-from-home giving everyone a bit of cabin fever, I spent almost every evening after work visiting some of my favorite local parks and nature preserves in the Seattle area,” he says.

“On that day, I went to this particular nature preserve in Seattle because a good friend of mine — excellent wildlife photographer Mukul Soman — told me he’s been seeing a green heron there in the evenings. We agreed to meet up after work, but at first I went to the wrong side of the preserve. I didn’t see much other than some of the usual birds.”

Eventually he realized he was on the wrong side of the preserve and met up with Soman, but they didn’t have any better luck finding a green heron. Instead, they were greeted by the perfect opportunity to photograph the osprey.

Ospreys are known for the dramatic, graceful dive into the water when they hunt which they can sometimes do from a height of 120 feet. Normally, they plunge feet-first into the water to capture their prey — fish — before flying quickly back up into the air and away to their perch to consume their prey.

This time, something was different that led to Woo’s unusual photo.

“I don’t claim to be an osprey behavior expert — or even an osprey expert in general — but this was my first and only time seeing this happen and I suspect it had to do with the weather condition,” Woo says.

“It was a muggy day: warm, humid, and windless (not to mention mosquitoes-infested by the lakeside where we were). Although I couldn’t figure out what just happened at the time, in looking at the sequence I captured, it looks to me like the osprey tried to grab a fish out of the water, missed, and then could not get enough lift to quickly get back in the air,” he continues.

“As good as they are at fishing, it is not uncommon for ospreys to miss but, typically, they get right back up in the air, shake off the water, and try again. In this case, I think the windless day, while great for getting the osprey’s reflection in the shot, also made it harder for the osprey to generate enough lift after hitting the water to get airborne again right away.”

Woo says that experienced bird photographers and birders know that birds generally land into the wind and take off into the wind in order to get that needed lift. But in this case, the osprey did not and instead glided just above the surface of the water for a moment, which culminated in what Woo calls a “skimming shot” where it was so close to the water that the tip of its beak and its talons were dragging across the surface. 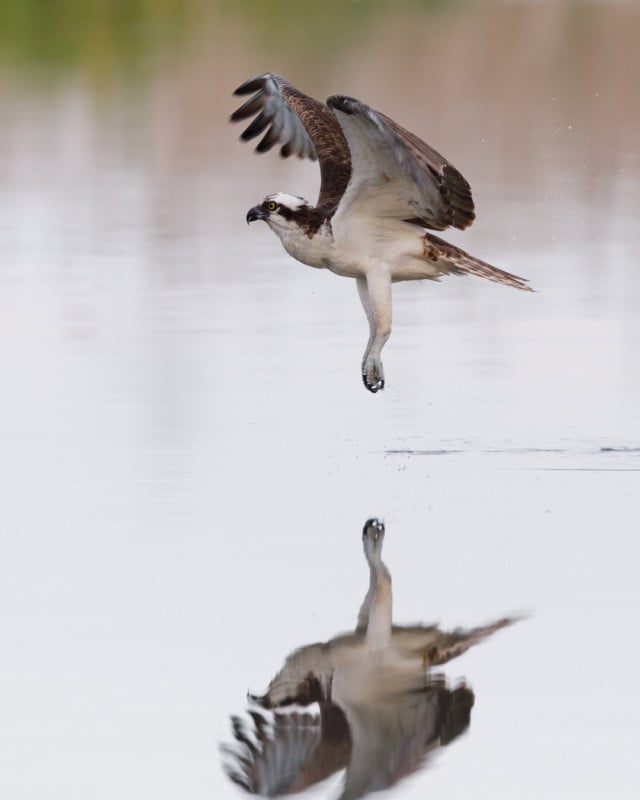 “It was then able to finally get enough lift to get back up higher into the air and then to a perch,” Woo explains, which is also pictured above.

“Just to be clear, I’m not sure that’s exactly what was going on, but it’s my best educated guess based on the photos I was able to capture. It also perched much lower than what I’m used to seeing, which worked out great because it provided us with a rare opportunity to take portrait shots of the osprey from a closer distance and better angle than usual.” 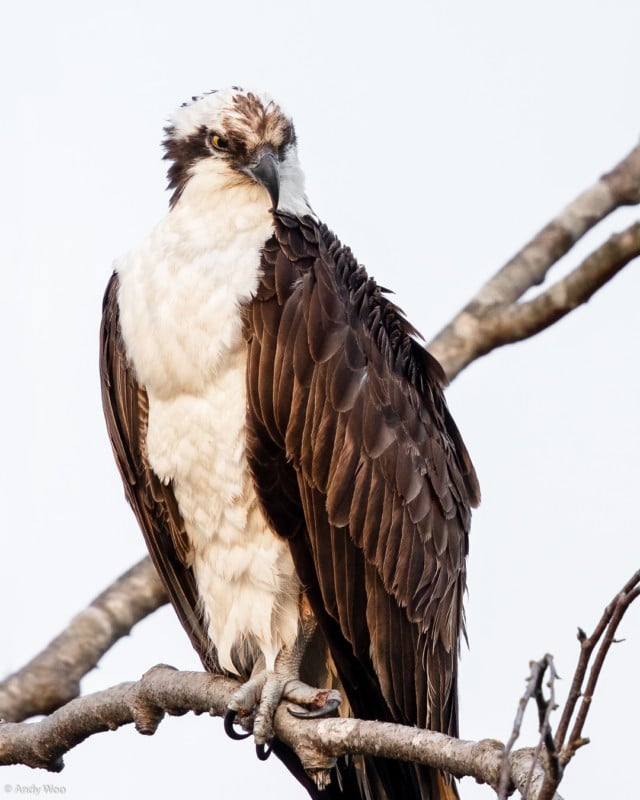 “In case people are worried, the osprey didn’t look sick or injured. It flew in with quite some speed and banked well just before it went in for the dive,” Woo adds.

“It’s also important to keep in mind that the precarious glide over the surface of the water (and the “skimming”) only lasted for less than a second based on the camera’s timestamps, so it’s not as if the osprey was struggling to gain altitude. over a long period of time. It was just ever slightly longer than usual that I was about to use the camera to capture that fleeting moment when the osprey was skimming across the surface.” 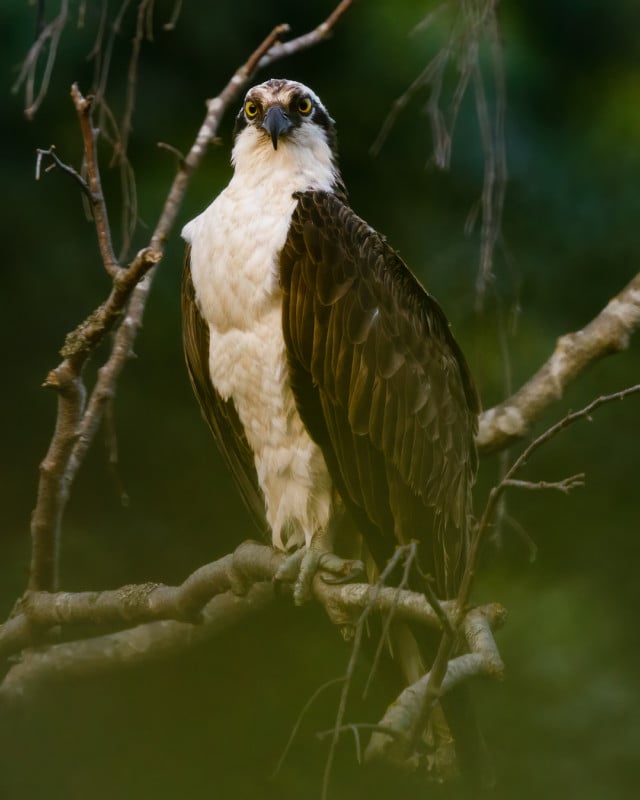 Looking back at how he was set up, Woo admits that he wasn’t fully prepared for the osprey, but managed to make it work.

“To be honest, I hadn’t even had a chance to dial in my camera settings and had to do it on the fly as it approached. It looked to us like it was hunting, so we expected it to dive, but it all happened so quickly,” he says.

“Looking back at the timestamps on my photos, it was nine seconds from when the first osprey appeared to the “skimming shot,” and another 6 seconds from that shot to when it perched; so the entire sequence lasted roughly 15 seconds,” he explains. The photo below was the first photo in that sequence. 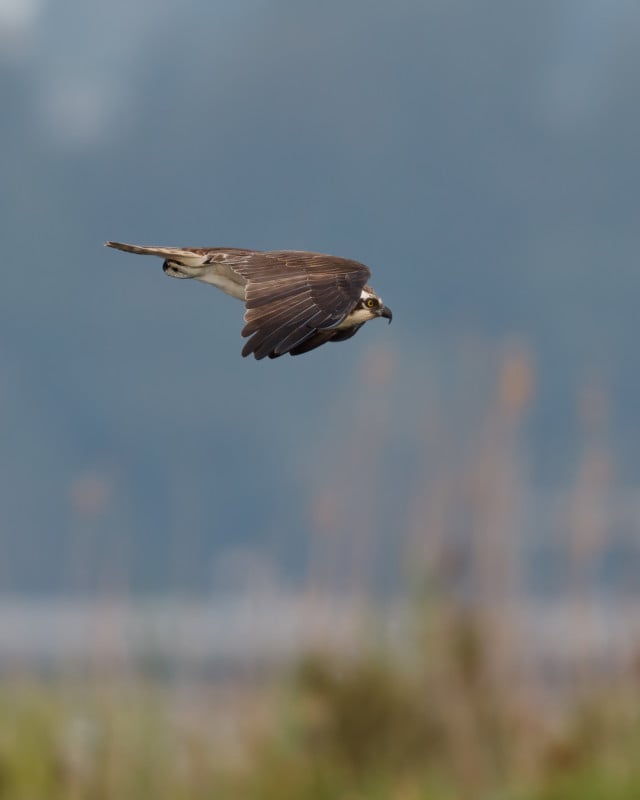 “At the moment, I was mostly perplexed at the and wondered with my friend Mukul as to what we just witnessed behavior. Was it getting a drink of water? Did it do it just for fun? The funny thing, and I think a bit of a lesson learned for me, was that because I was so set on getting a shot of an osprey grabbing a fish out of the water, my mind was still fixed on that.

“I was certainly glad I got an interesting shot, but my mindset at the time was ‘well, at least I got something passable,’ rather than ‘whoa, what a moment, what a shot!’ For the rest of the evening we were still eagerly anticipating and hoping that after a short rest the osprey may try again and catch a fish this time. It’s a good reminder that even if we go into the field with a preconceived idea of ​​what ‘the shot’ we want should look like, nature sometimes surprises you with something even more captivating or unique.”

Woo says that he has been photographing birds for the better part of 10 years, so when he snapped the photo of the osprey, he had almost eight years of experience.

“I’ve always been interested in wildlife and photography as a child, but never had access to a “real” camera (only the family’s point-and-shoot) until I was in law school and got a paid internship in the fall of 2012 that allowed me to buy my very first DSLR: a Canon Rebel T6i,” he says.

“I was dreaming of the kind of wildlife photography you see in National Geographic, but really the kit telephoto lens that came with it (a 55-250mm) was just barely long enough for photographing ducks at the park and birds in the backyard, so that’s what I did,” he adds.

“Birds weren’t necessarily an obsession back then, but I wanted to photograph wildlife — any wildlife — and birds were the most readily available and accessible wildlife for someone living in an urban area and attending law school. I actually remember one of the very first birds I photographed was a group of tiny, gray birds in the backyard of my family home. I went back inside, hopped on the computer, and used an online bird guide to identify them as Common Bushtits, and the obsession grew from there.”

Woo says that most of his photos, and many of his favorite shots, come from what many would consider to be “ordinary” locations like local parks that he visits regularly. His idea of ​​scouting locations isn’t really the same as what landscape or portrait photographers might do, but instead is more organic.

“Even after doing this for almost ten years I cannot claim to be an expert, but you do learn new things each time you go out to shoot, about the location, the wildlife and their behaviors,” he says. 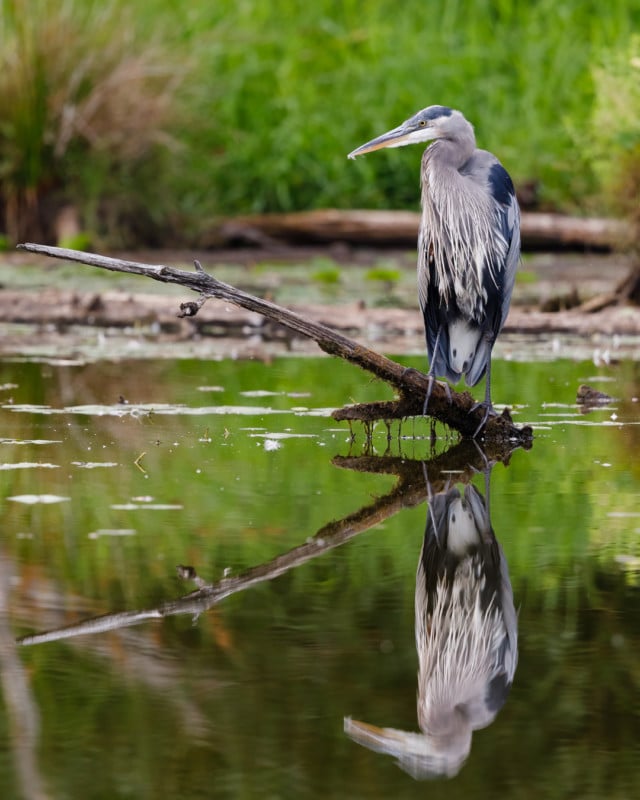 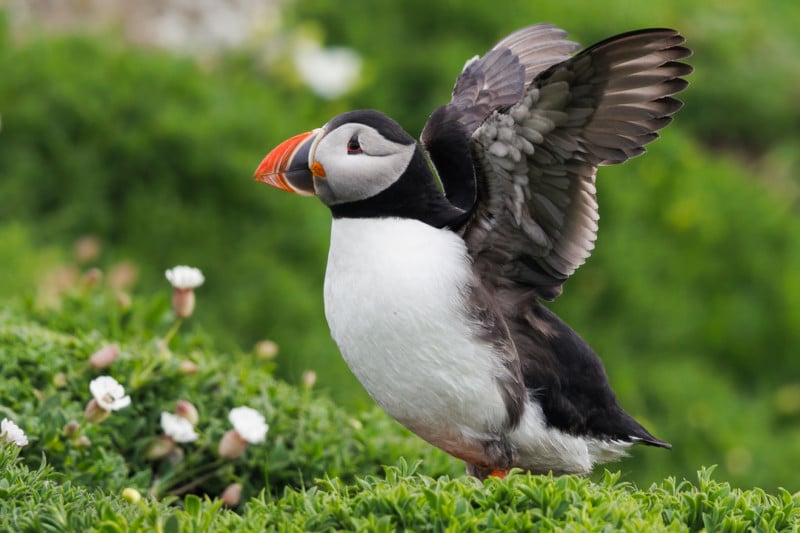 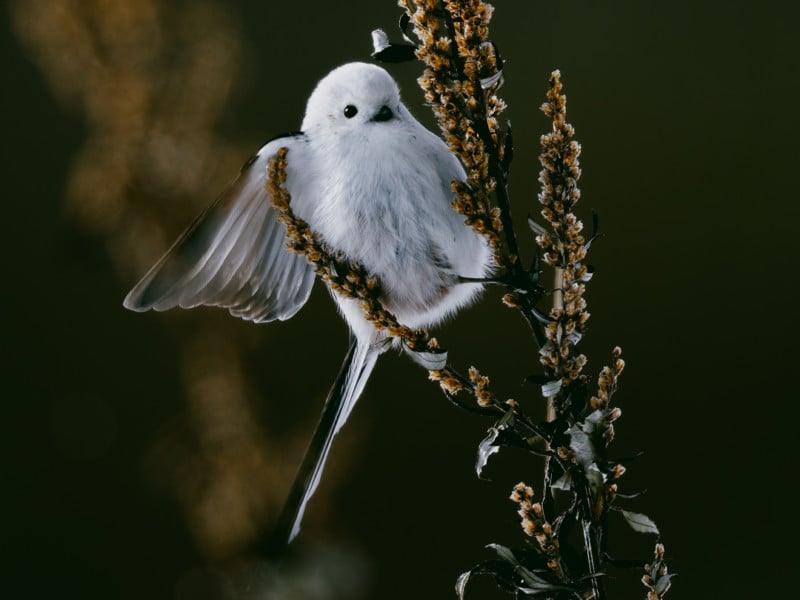 “For people who may be interested in getting into wildlife photography, I think the foremost is to develop an appreciation and respect for wildlife and nature. In the last couple of years there’s been quite a few news headlines about people getting too close to wildlife (eg, bison in Yellowstone) or photographers behaving badly in order to ‘get the shot,'” Woo adds.

“In my experience, chasing after the shot never does anyone (including yourself) any good. I’ve had better success picking a spot at a respectful distance and waiting quietly, letting the animal come to you (or not). There will be plenty of times when it’s a complete bust or you don’t get the shot for one reason or another, but that’s truly a part of this hobby.” 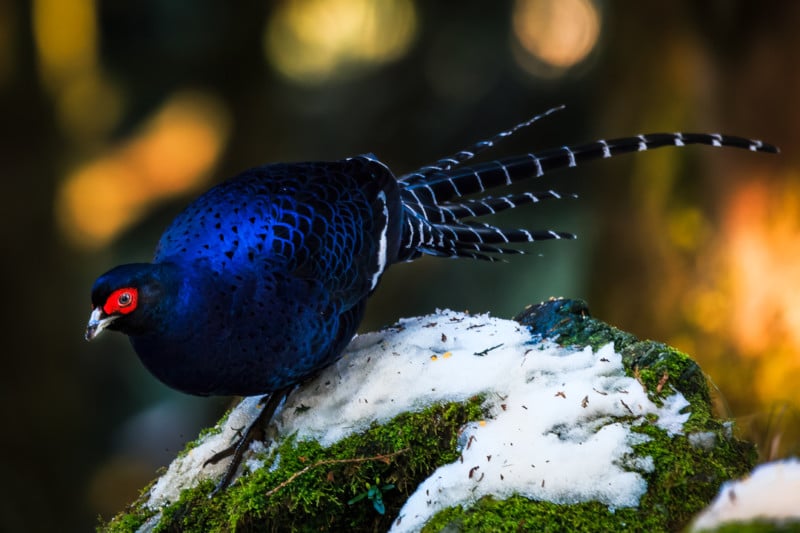 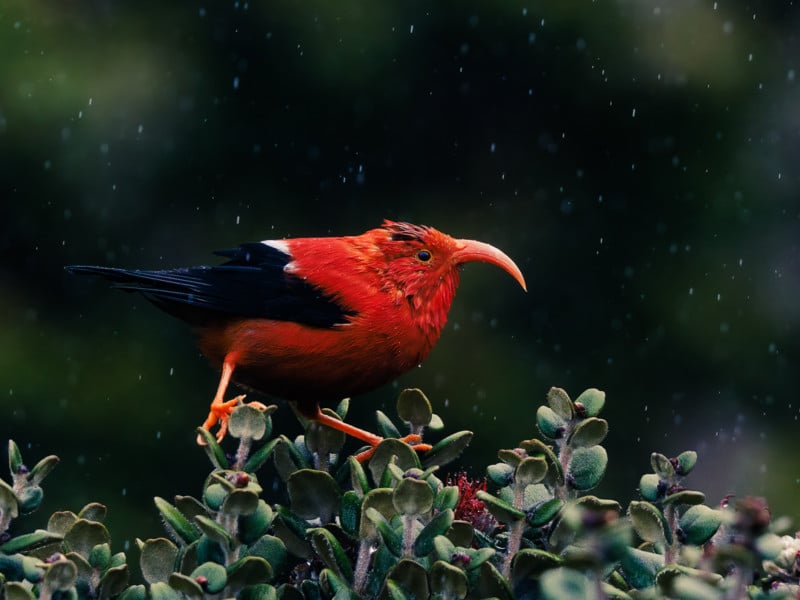 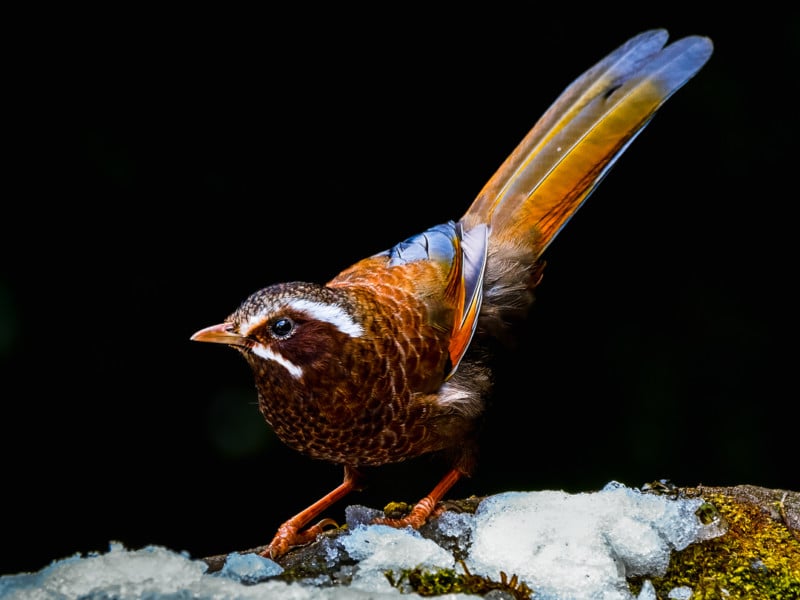