Police departments are using a new high-tech tool for catching criminals and identifying victims: realistic portraits generated from DNA data. The technology is astounding in its results, but it has attracted its fair share of criticism and controversy.

Last week, the Edmonton Police Service (EPS) — the municipal police force for the City of Edmonton, Alberta in Canada — announced that, for the first time in its history, it was using DNA phenotyping in the hopes of identifying a suspect in a 2019 sexual assault case. 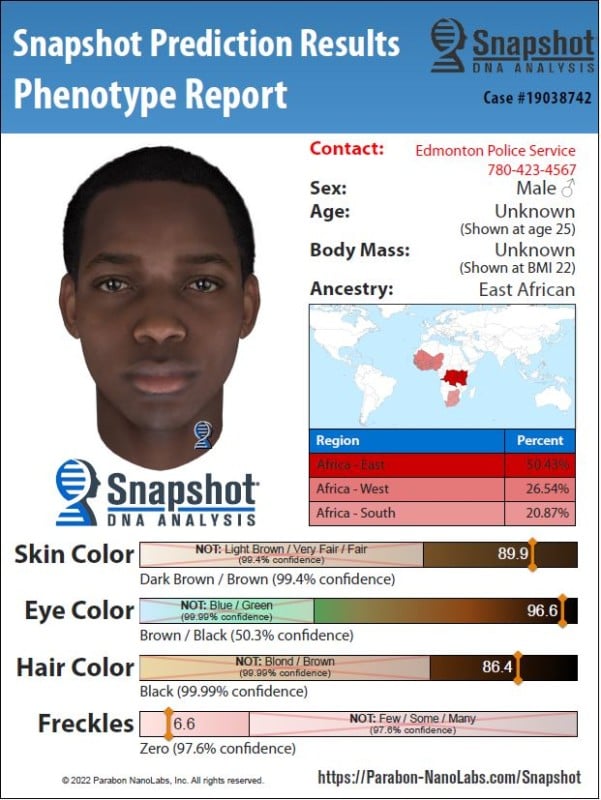 The EPS shared a computer-generated image of a Black male suspect that they created with DNA phenotyping and stimulate anyone who may have information about the assault to come forward. However, the police’s use of technology has since been mired in controversy.

On March 10, 2019, at approximately 5:45 am, police received a call that a female was found yelling for help in the area of ​​103 Street and 114 Avenue in Edmonton. The woman had been the victim of a violent sexual assault and she had sustained serious injuries.

Following a long investigation into the case where no witnesses, CCTV, public tips, or DNA matches were found, detectives took the step of enlisting Parabon NanoLabs, a DNA technology company in Virginia that specializes in advanced DNA analysis services. The service used in this case was DNA phenotyping, the process of predicting physical appearance and ancestry from unidentified DNA evidence.

Using DNA evidence from this investigation, Parabon produced trait predictions for the suspect of the 2019 sexual assault case. Individual predictions were made for the subject’s ancestry, eye color, hair color, skin color, freckling, and face shape.

By combining these attributes of appearance, a “Snapshot” composite was produced depicting what the POI may have looked like at 25 years old and with an average body-mass index (BMI) of 22. These default values ​​were used because age and BMI cannot be determined from DNA.

On October 4, the EPS shared a press release along with a computer-generated image of a young Black male suspect that they had created with DNA phenotyping. The police force released the portrait to the public, both on its website and its social media platforms with an accompanying message from Detective Colleen Maynes who works for the EPS Sexual Assault Section.

“This is essentially a last resort after all other investigative avenues have been exhausted,” says Maynes. “It is by no means an immediate path to accusing a suspect. What it does is potentially give us leads in a cold case, and we can follow up with DNA testing from there.”

The EPS’ decision to produce and share this image was immediately met with questions about the privacy violations of DNA databases that investigators can search through as well as the racial biases in DNA phenotyping for forensic investigations.

Privacy and criminal justice experts dubbed the police force as irresponsible for disseminating the composite portrait of a young Black male suspect.

In response to the criticism regarding the publication of the image and the use of DNA phenotyping, Edmonton police released an apology on October 6 and removed the image from its website and social media.

The EPS has issued a statement on Tuesday’s DNA phenotyping media release.

The EPS published an explanation for the decision to use DNA phenotyping two days after the image was released. The statement describes the brutality of the attack and the lack of leads, or evidence that could generate leads. The EPS’ chief operating officer, Enyinnah Okere describes how the force was aware of “the legitimate questions raised about the suitability of this type of technology,” but did not adequately consider the risks and unintended consequences of its use for Edmonton’s Black community.

According to Parabon, it has worked on hundreds of law enforcement investigations and successfully generated portraits of suspects from DNA data. On its site are a several case studies, with many showing the comparison between the DNA profile and actual photo of the suspect. As seen in the below images, there are some similarities between the DNA profile and the real photo of the suspect, in that they both reflect the same race, gender, eye, and hair color. 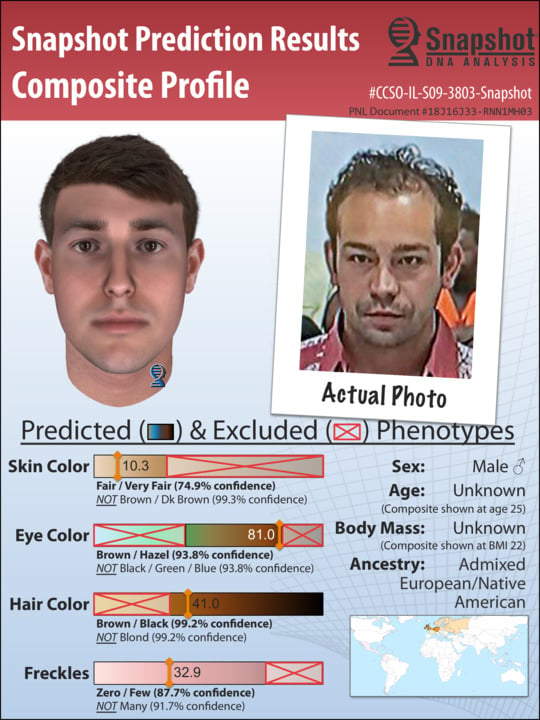 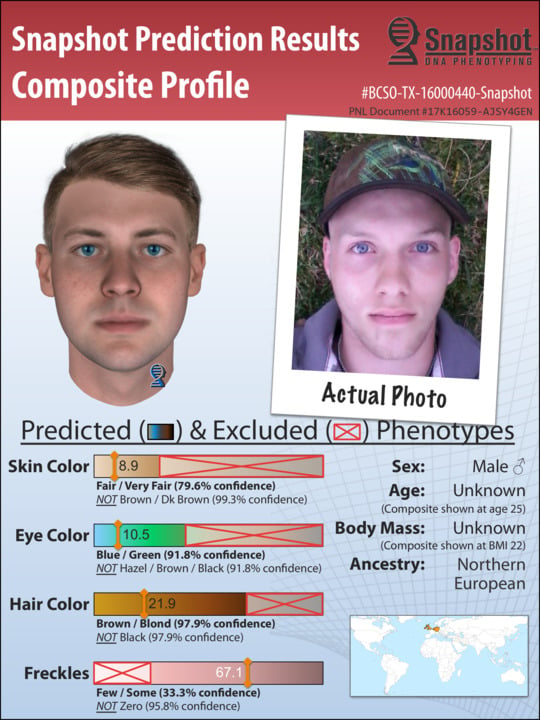 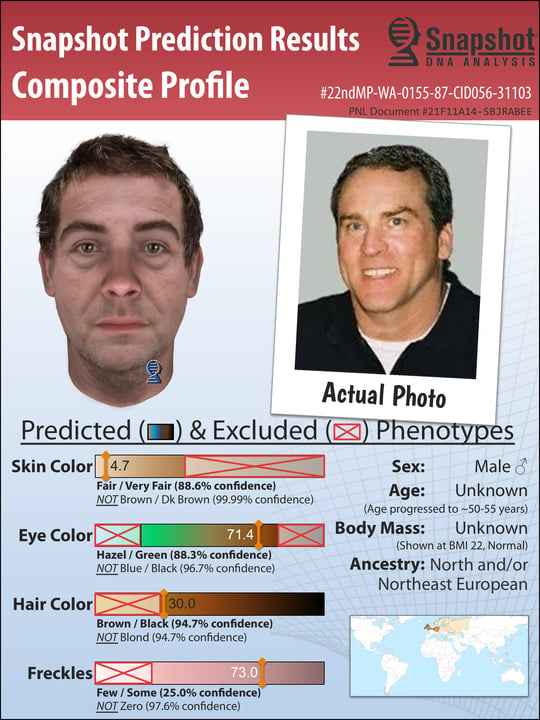 “We’re making predictions just from the DNA, so we have only so much information. And so when we make those predictions, it’s a description and these are standing in. If the police had a witness, then they wouldn’t need us,” Dr. Ellen Greytak, the director of bioinformatics and technical lead for the Snapshot division at Parabon NanoLabs, tells Vice. “We’re providing facts, like a genetic witness, providing this information that the detectives can’t get otherwise.”

“It’s just the same as if the police had gotten a description from someone who, maybe you know, didn’t see them up close enough to see if they had tattoos or scars, but described the person,” says Greytak. “What we find is that this can be extremely useful especially for narrowing down who it could be and eliminate people who really don’t match that prediction.”

She adds “In these cases, by definition, they always have DNA and so we don’t have to worry about the wrong person being picked up because they would always just match the DNA.”

According to Greytak, the technology creates the composite image by running the suspect’s DNA through machine-learning models that are built on thousands of people’s DNAs and their corresponding appearances.

“The data that we have on the people with known appearances are from a variety of sources, some of them are publicly available, you can request access for them. Some of them are from studies that we’ve run, where we’ve collected that information,” says Greytak.

The DNA dataset being used to create these composites does raise more red flags regarding the privacy questions of DNA profiling. The “variety of sources,” include GEDmatch and FamilyTree DNA, which are open-source, free genealogy websites that give users access to millions of DNA profiles.