You may know Xiaomi, but do you know Poco? Xiaomi’s sub-brand isn’t a household name on this side of the world, and the F4 GT isn’t necessarily a camera-first phone, either.

No, that’s because mobile gaming is the focus here, something made clearer once some of the phone’s features come into play. It is a mid-ranger, at least in theory, except some of the guts inside lend credence to it being something more. The challenge is that not all components are made equal, and there’s truth to that in this respect, too.

When I first took the device out of the box, I looked at all the buttons along the right edge and figured they could work with the camera. Not true, apparently. There are two recessed buttons that lift up when sliding the two hatches beside them. They’re shoulder buttons for games, though Poco does allow for some limited customization, these “pop-up triggers” have two functions, be it a double-click or press and hold, and each one can do its own thing.

I used a press-and-hold to launch the camera, while a double-click started recording video. There is no option to turn either one into a physical shutter release — a real shame because these buttons would be perfect for burst shooting. Basically, once I launched the camera, the buttons could do nothing else within the camera interface, unless I used them to start recording video.

I get that Poco wasn’t focusing on the camera when rolling these buttons out, but it’s not like its engineers couldn’t. You can set those same buttons to record audio, record the screen, turn on the flashlight, or go into silent or vibrate. It’s hard to understand why simply snapping a photo isn’t one of the options on that list. 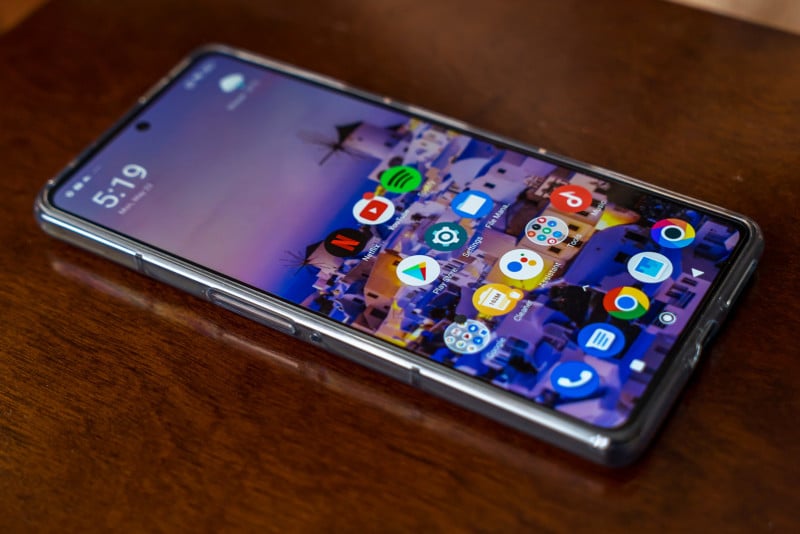 It would also add to the beauty inherent in the device. The F4 GT is a nice-looking phone, owing to its glass craftsmanship and slick 6.67-inch AMOLED screen. The panel is limited to 2400 x 1080 resolution, so no squeezing in extra dense pixels, but it’s sharp, supports 120Hz refresh rates, and has good Gorilla Glass Victus protection. What’s less obvious is why Poco used the words “Speediest” and “Freezing” on the back panel. I will say, though, making the LED flash into a lightning bolt cutout in the rear next to the rear camera array is an aesthetic plus. I may not use the flash, but it’s still a good move.

The F4 GT runs on the Snapdragon 8 Gen 1 processor, so it is sporting Qualcomm’s best current silicon. My review unit had 256GB of storage and 12GB of RAM, though there is a 128GB and 8GB variant as well. There is no memory card slot on either variant.

While 5G-enabled, its reach won’t extend as far in North America, where limited band support means spottier connections with the likes of Verizon, AT&T, and T-Mobile. Coverage on their 4G LTE networks, however, should be seamless.

The Poco F4 GT is very much like a pared-down iteration of what Xiaomi has already done. Unlike the Xiaomi 12 Pro, which used a newer image sensor, the main 64-megapixel one (26mm equivalent) in the F4 GT is a more modest 1/1.73-inch Sony IMX686 with an f/1.9 aperture. The 64M-megapixel in the camera will let you shoot at the full resolution, otherwise it will shoot at a pixel binned 16-megapixels. 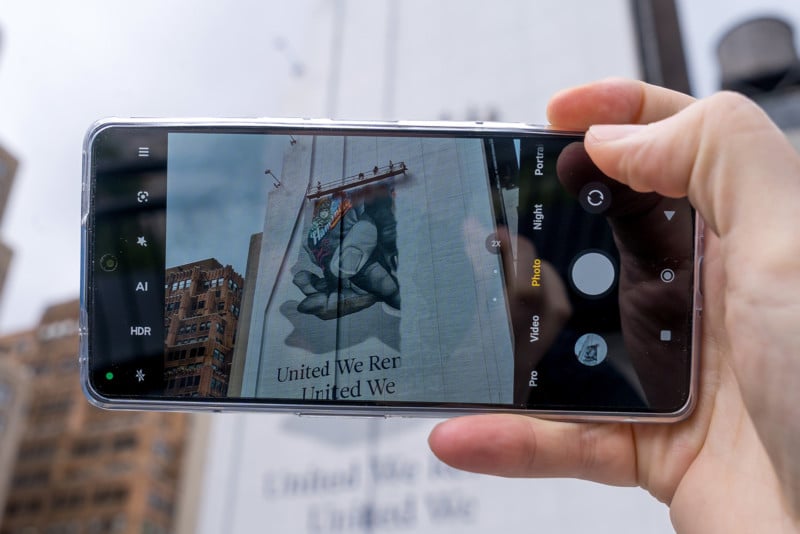 The 8-megapixel f/2.2 ultra-wide (16mm equivalent) is less impressive with its OmniVision OV08856 image sensor. Rather than throw in a telephoto lens, Poco went with a 2-megapixel macro that you would hope could produce passable close-ups.

There’s plenty of familiarity if you know Xiaomi’s MIUI overlay on top of Android, and the camera layout is very much the same. Poco does provide plenty of modes to shoot with, all of which carry over from Xiaomi’s own branded devices. I’m not crazy about MIUI, as a whole, but at least the camera is easy enough to figure out.

As is common with Chinese manufacturers, you get an AI Camera mode, which works to amp up color and contrast wherever it can. I often shoot with such features turned off because there’s little one can do to control them once they’re on. At any rate, if you want that in certain shots, you can always give it a try.

It’s everything else that should garner more attention. The menu from the top-right has a macro and tilt-shift mode, as well as a timed burst to capture movement. It’s interesting for its granular detail — you can capture up to 600 shots in 60 seconds. Others, like Clone, Documents, and Long Exposure also come over from Xiaomi’s phones.

The best you will get with the F4 GT is with the main camera. Despite its mid-range sensor, it can shoot well when you make use of what’s available. One of the keys is the exposure slider as a way to offset the excessive brightening in every shot. Any scene with bright highlights or darker shadows goes harsher with light. Even with HDR on, the results only balance so far. Lower the exposure on a brighter shot, or in some cases, even with a darker one, and you see really good results. 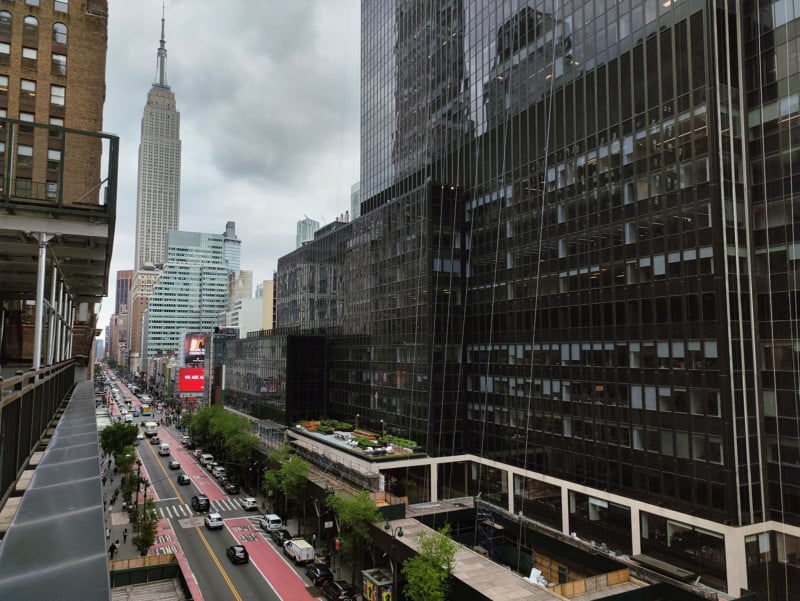 I was surprised at how good composition was, particularly with shots requiring thought. Available light makes a world of difference, and I improvised wherever I could, like a candle on a dinner table or the ambient light in an arena. I also didn’t expect to see the same level of detail for a variety of subjects. At first, I thought it might just be processed sharpening, but the shots I got were impressively natural — both indoors and outdoors. 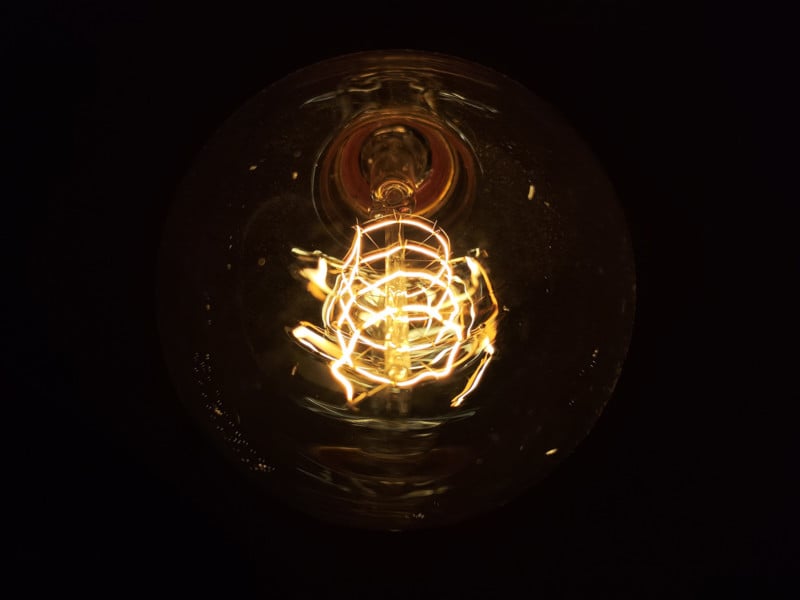 Night and low-light photos came out pretty well, for the most part. The mode sometimes does more harm than good by processing images to a point where zooming in reveals “gooey” pixels. Hardly a shocker for a mid-range phone, but also odd how the regular photo mode can occasionally outdo Night mode in those conditions.

I liked the Long Exposure mode for the creative potential. On a whim, I used it in a speakeasy in New York, where it was very dark, with the idea that I could capture a bartender moving in silhouette to create a neat effect. The whole mood is really no different than it is on a Xiaomi device, with the only exception being the image sensor inside. The Snapdragon 8 chipset is more than capable of rendering in short order, and it shows no matter what mode you choose to shoot in.

It is here where the weaknesses start to show, and it has everything to do with the periphery. Zoom in on the edges, and you see smoother pixels indicative of a sensor that prioritizes whatever’s in the middle more than anything else. It’s certainly not impossible to take a good ultra-wide shot, it’s just more challenging to do so in varying conditions. 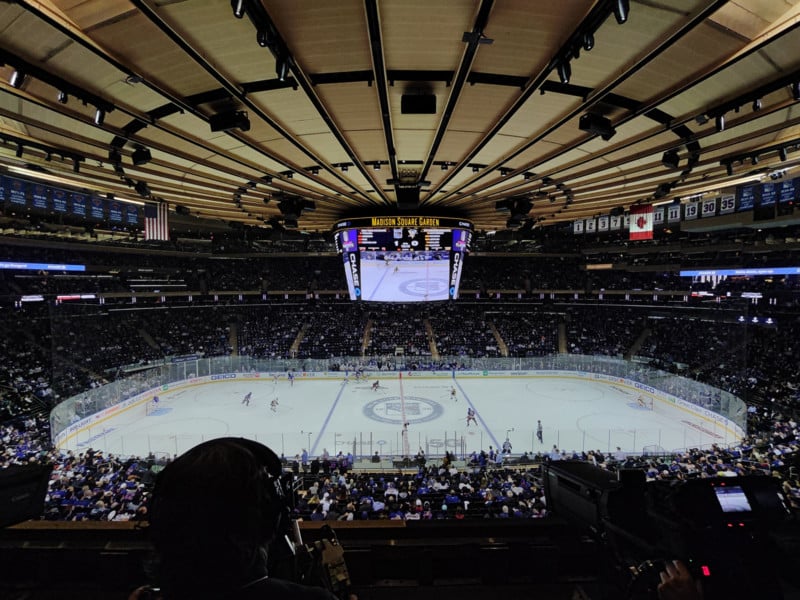 Poco makes it available in several shooting modes, so there is that at least. You won’t be able to use it in Pro or Long Exposure, for instance, but Photo, Night, and the video modes can work with it. Same with tilt-shift and timed burst shots.

I wasn’t expecting much from either of these, though can say they offer some utility in the field. With portraits, the phone can feel unforgiving if you’re not in the sweet spot where the bokeh effect kicks in. Just when I thought I had locked on to the subject properly, the resulting image wasn’t as crisp as I would’ve wanted. It’s something to look out for when using that mode. 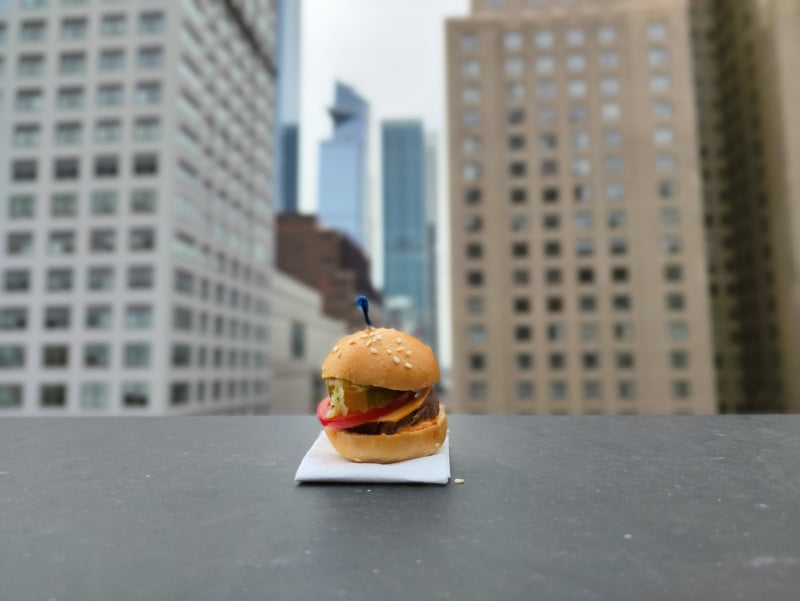 Macro shots are similar that way, meaning you have to hold the phone at a certain distance and the F4 GT doesn’t tell you when you’re in the ballpark. Without any focus peaking, which would be great to have in this mode, you are kind of going on assumptions that you’ve got everything in focus. 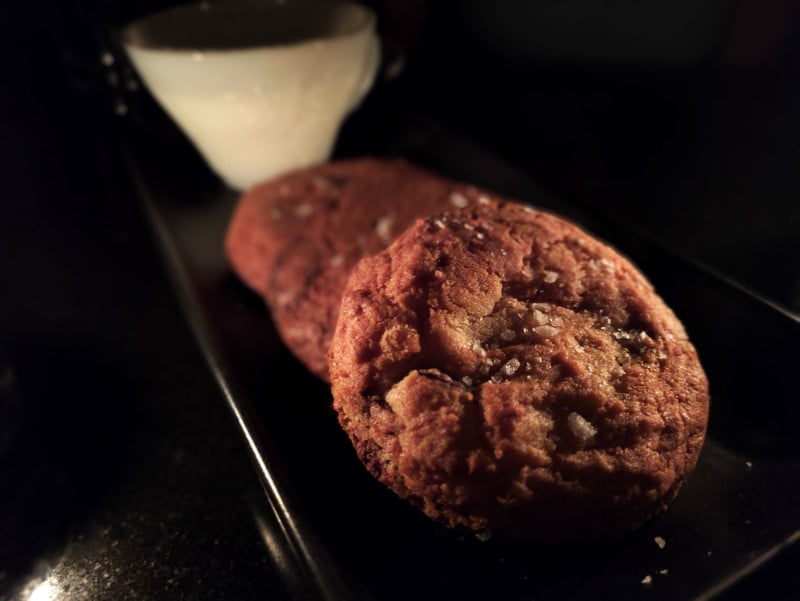 There’s some depth here any shooter can appreciate. Much like Xiaomi, Poco serves up a number of options, from the ability to switch between the main and ultra-wide lenses, and on to metering, composition parameters, focus peaking, exposure verification, and filtering. You can shoot in RAW, if you like, or go with the 64-megapixel mode, if you prefer that option. In case you’re new to Pro mode, there’s a solid explainer built into the interface highlighting what each of these features does.

Results are pretty good, all things considered. I’m not sure there was a huge difference between RAW and 64-megapixel in images with good lighting, but I preferred RAW if I was going to capture something more challenging. For a mid-ranger with good supporting features, the F4 GT has a solid Pro mode worth using.

There isn’t anything too surprising going on here, though it is easy to appreciate the choices you have. The main video mode can shoot in 4K up to 60 frames per second, and even in macro, if you want. Short Video and Vlog are all about social media-type content. Movie Effects adds Hollywood-style tricks, like parallax, slow shutter, time freeze, and parallel world to video, which you can also shoot in 2.35:1 aspect ratio. The only thing missing is a 24 frame per second framerate option for true cinematic video.

Dual video is one of those gimmicky modes that uses the rear and front cameras together. Apart from that, you can have some fun shooting clips with the F4 GT, except what you come up with may really vary depending on what and where you’re shooting.

A Gaming Phone with a Capable Camera

Poco doesn’t hide who it thinks would like this phone most. So much of its build and feature set caters to gamers, so the camera doesn’t get the same shine. The internal components are powerful enough to play the games you want, so that’s covered, but good hardware also helps render photos and video faster. 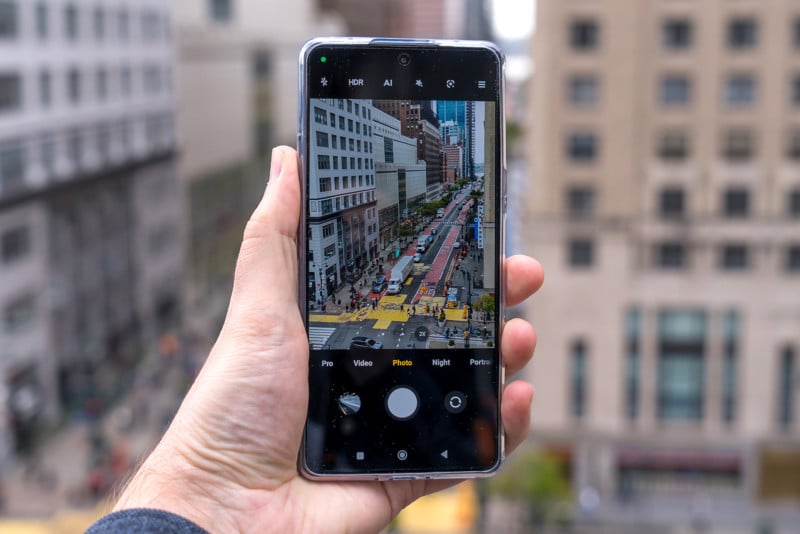 Think of it as a fringe benefit, or at least one that comes with useful caveats. Poco borrows heavily from Xiaomi, and had there been a better image sensor for the ultra-wide, this would’ve been a pretty nifty mobile shooter in more ways than one.

If we’re looking at mid-range phones that are less about gaming, and more about photography, then you have to look at the Google Pixel 6, and even the Pixel 6a when that comes to market. The Samsung Galaxy S22 is good value, considering so much of Samsung’s camera arsenal finds its way into that device as well. The same could be said of the iPhone 13 if you’re inclined to go the way of iOS over Android.

Should You Buy It?

Unless you’re equal parts photographer and gamer, probably not. The gaming element truly matters here and should be a key reason why you choose the Poco F4 GT over all others. For less than $700 though, you do get a solid device with a capable camera, and one that no one else around you is likely to wield.