Two years ago, Mossberg introduced the 940 line — a new series of pro grade semi-automatic shotguns designed in partnership with shooting sports legend, Jerry Miculek. Of all the models in the 940 line, perhaps the most unique is the “Snow Goose,” with its striking “Battleship Gray Cerakote” finish and “Truetimber Viper Snow” stock and grips.

Everybody who sees this shotgun immediately comments on the unique and vivid winter camo, and it’s one of the features that sets this gun apart: 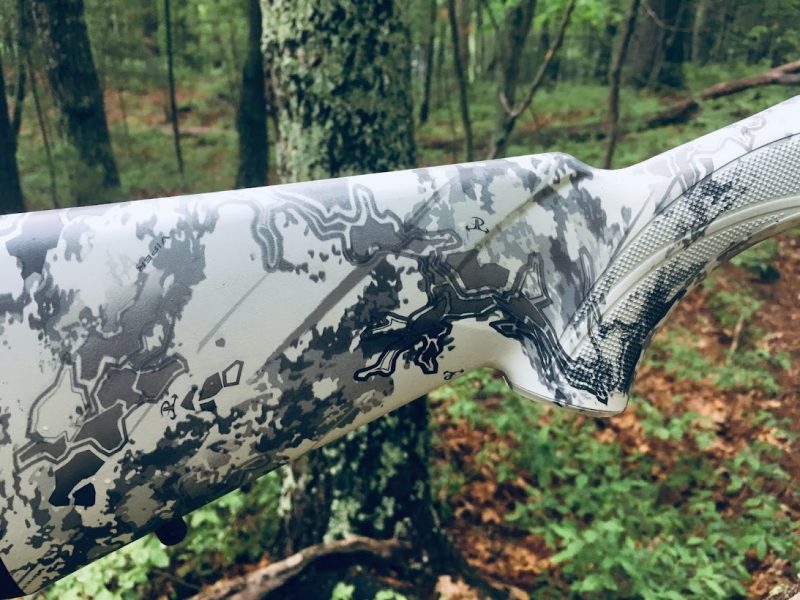 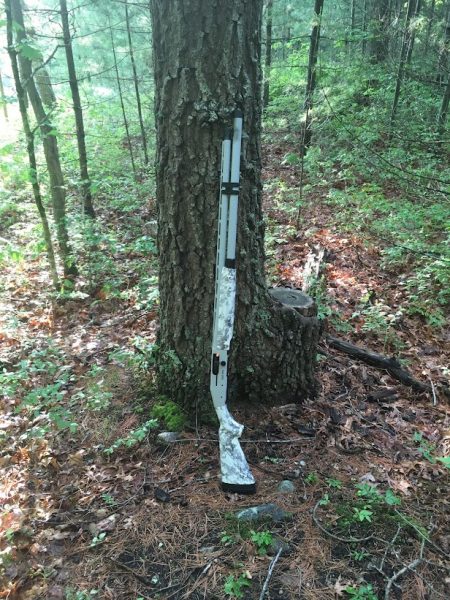 . . . But since most hunts occur during the fall/winter months, there’s nothing wrong with the gun’s cold-weather look.

Also, having spent many hours touring drydocked battleships at various US Navy museums, I can tell you the “Battleship Gray” cerakote finish is a superb match with the real thing:

If you ever have the opportunity to hunt waterfowl from the deck of a battleship, the 940 Snow Goose is the bird gun to bring. The ducks will never see you as you take aim from behind a Quadruple 40 mm Bofors anti-aircraft turret.

Unfortunately, none of us will probably be lucky enough for such a fantastical opportunity, but what is the Snow Goose designed for?

What is it for?

The camo isn’t the only thing that makes the Snow Goose stand out in a forest of wood, polymer, and blued steel. It’s also one of the longest guns you’ll see — a lengthy 51 1/2 inches in overall length. Here it is, pictured next to the smallest rifle in my safe, a .22 Savage Rascal: 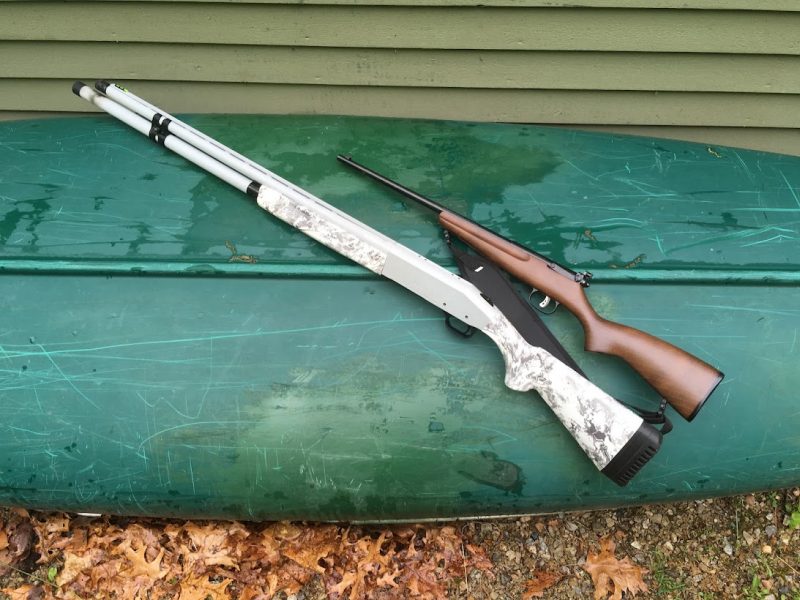 This XXL length includes an oversized, extended magazine tube which gives this shotgun a capacity of 12+1 2 3/4″ shotshells (and 11+1 3″ magnum shells).

While this is impressive capacity, it does present some limitations on the different’s practical use cases. For one thing, nobody’s going to be using it to clear tight spaces and hallways when things go bump in the night.

Secondly, in most states, it’s illegal to hunt game animals with more than a few shotshells. Usually the number is 3 for most waterfowl, and sportsman can often buy plugs that reduce the capacity of their tubular magazine-fed shotguns. As of now, there isn’t a commercially available shotgun plug long enough to reduce the Snow Goose’s capacity to legal limits (although it isn’t hard to make one out of a regular dowel).

Due to this legal limitation, un-plugged Snow Goose 940’s aren’t going to see much action in duck and turkey hunting — but that’s acceptable, due to their excellence in three other sporting applications listed below.

The 940 Snow Goose will be a natural winner in any competitive event where a reliable, high capacity shotgun is required.

It could be particularly useful in 3-gun matches where a typical scatter gun stage might require the discharge of 20 shotshells. Many 3-gun competitors use mag-fed AR-style 12 gauges for these events, but those who wanted to compete with a more traditional shotgun could still benefit from the high capacity Snow Goose offers.

This shotgun’s enhanced front sight is also an advantage for competitive accuracy. The Snow Goose comes equipped with a green HIVIZ® Fiber Optic front bead. It’s a significant improvement over a standard brass bead front sight. The triangular profile gives you an exact spot to align the bead with your target. 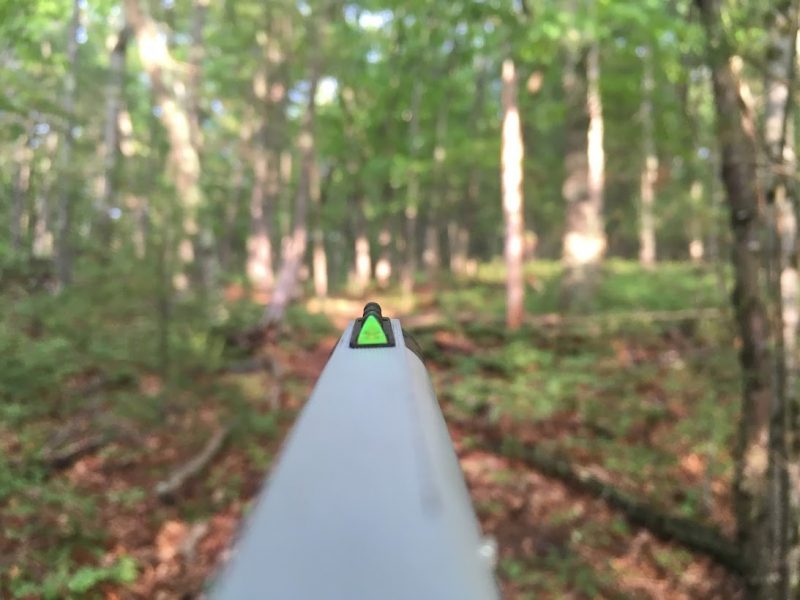 The 940 is a great choice for competitive or recreational clay pigeon blasting.

Here’s a short clip of my Snow Goose in action, blowing up clay:

The Snow Goose exhibits excellent pointability, and its weight and length reduce muzzle rise, allowing you to get back on target fast. Note the little dance my muzzle does in the video above, caused by my mis-read of the pigeon’s trajectory. In a less handy firearm, this mistake would have cost me the shot; I love a firearm that helps you correct. The fast-cycling action also enabled me to score a quick save with a follow-up shot when I happened to miss the first time.

While most waterfowl and game birds are protected by shotshell capacity limits as mentioned above, there’s a few that are exempt. Some birds are considered invasive or overburdening to their ecosystems. Curious which birds fall into this category? Well, as you’ve probably guessed by now, one is none other than the (roll credits) North American Snow Goose:

The snow goose is extremely prolific and their overpopulation is damaging North American tundra. In many states where they reside, hunting protections have been waved. In most places where you can hunt snow geese, there’s no limit on shotgun capacity, and sometimes no limit on possession and harvest numbers (rules vary by state; confirm with your local jurisdiction).

Hence, that’s how the Mossberg 940 Snow Goose got it’s name: it’s a winter-optimized, high-capacity shotgun that would be perfect for bagging 13 snow geese without a reload in between.

What Comes with the 940 Snow Goose?

First of all, a very large box. I tried to fit the box in the trunk of my Honda Civic, and it wouldn’t go in at any angle. Just a logistical note for your trip back from the gun store: 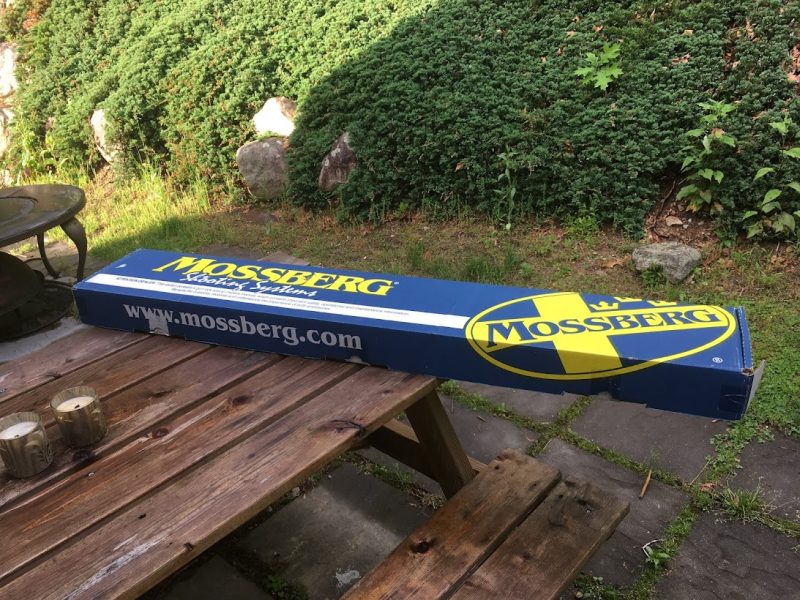 Inside that huge box, along with the shotgun, is a whole pile of useful goodies: 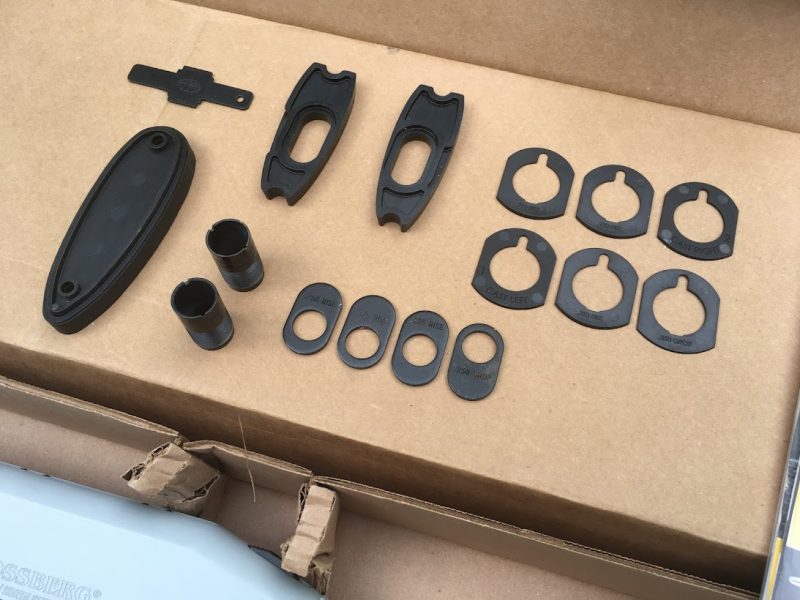 There’s a choke wrench, and Full and Improved Cylinder spare chokes, to go with the Modified Acu-Choke pre-fitted on the shotgun: 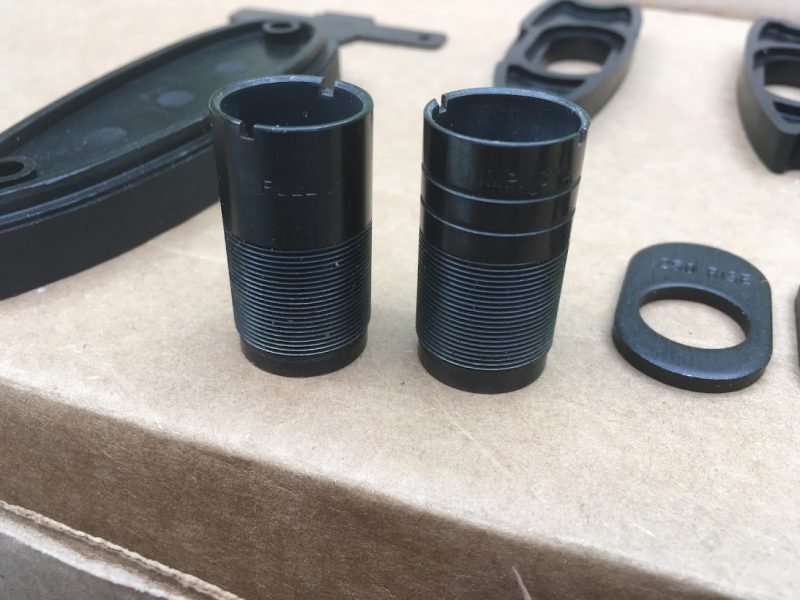 There’s also a complete set of Length-of-Pull spacers, left-hand and right-hand receiver shims, and stock plates that allow you to optimize the stock’s position to perfectly match your body and shooting style: 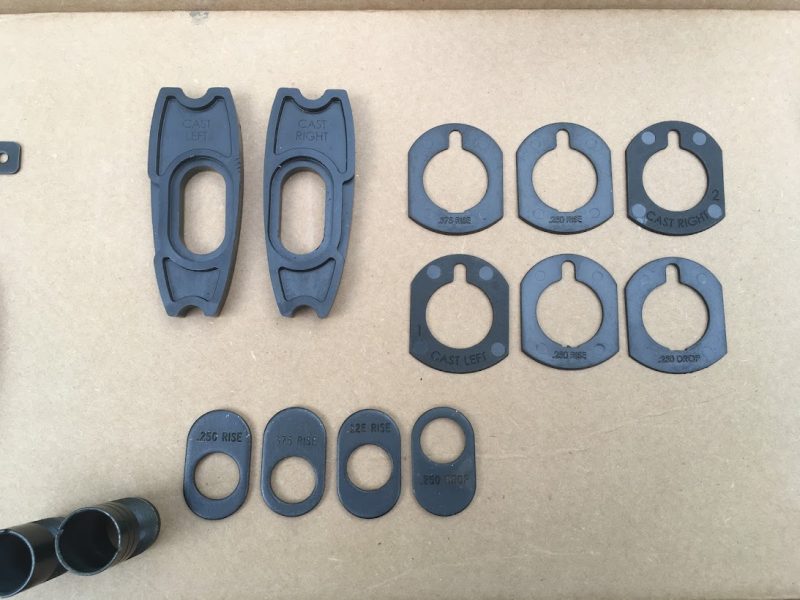 The only feature about the Snow Goose I can’t decide if I like is Mossberg’s unique unloading mechanism.

In most tubular-magazine fed shotguns, you must unload the firearm by cycling all rounds through the chamber and then back out. This raises some safety concerns, since it’s unnerving to have that much live ammo cycling through the weapon — even if the safety is on, and your finger is off the trigger. As a workaround, Mossberg 940’s can be unloaded by depressing the bottom loading gate and then pressing the bolt release: 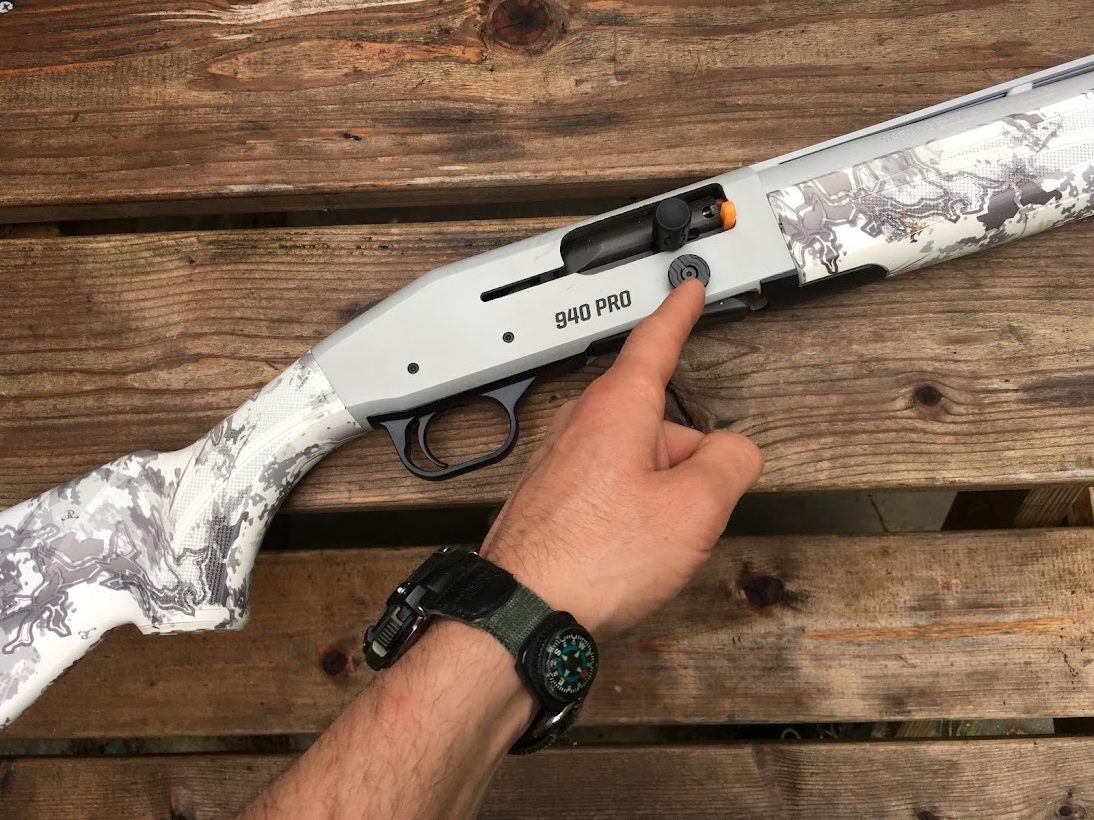 Doing so will safely eject a live round out the bottom without needing to take a trip through the chamber. This is a really nice feature — BUT . . . 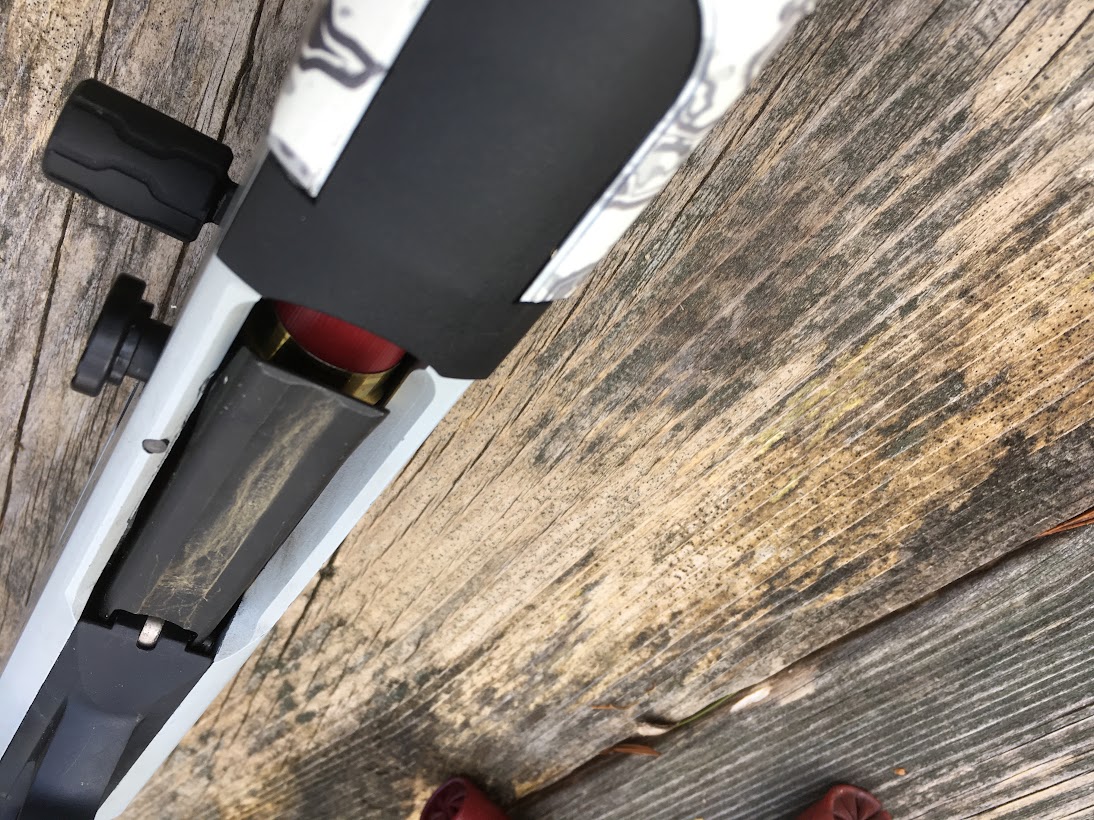 This eliminates your ability to top off the mag tube with more rounds, or mix in a different type of shotshell mid shooting. Once you hit that bolt release button, you can’t add a shotshell until you take another shot; the shotshell staged above the loading gate keeps it from being depressed: 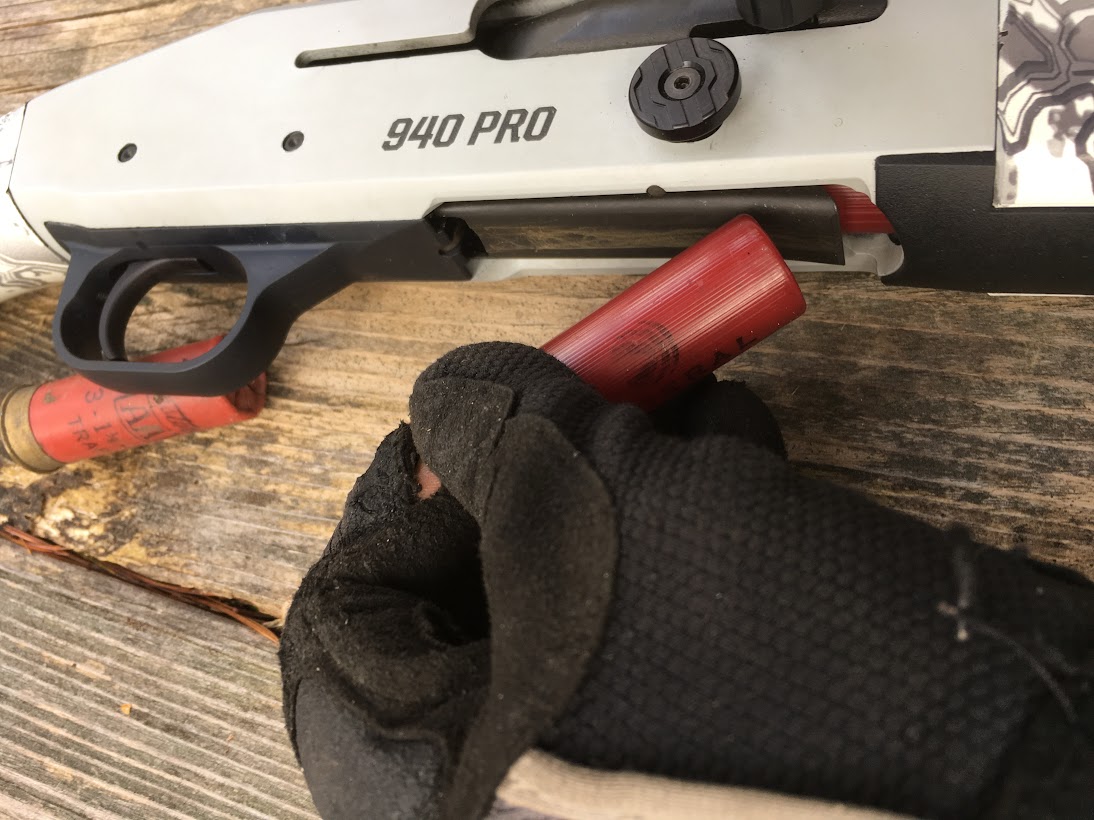 Also, on one occasion, this pre-staged round caused a double feed. I wasn’t able to replicate the incident, however, so I’m willing to accept that it may have been operator error.

It’s definitely a unique feature which adds extra safety, while slightly altering the manual of arms for those who like topping off their shotgun as they fire. It can also present a minor annoyance if you accidentally hit the bolt release while the weapon is already in battery and you didn’t plan to unload.

Overall, the 940 Snow goose is a finely crafted firearm, equipped with the action, trigger, and controls you’d expect from a high-end pro shotgun. Everything about this gun has that luxury feeling comparable with sitting behind the wheel of a Cadillac or Audi. Its high capacity, excellent performance, and gentle recoil will tempt you to burn through many boxes of shotshells.

And, if Snow Geese are causing ecological disaster in your home town, the Mossberg 940 is the perfect tool to protect your little slice of nature from these ravaging birds. 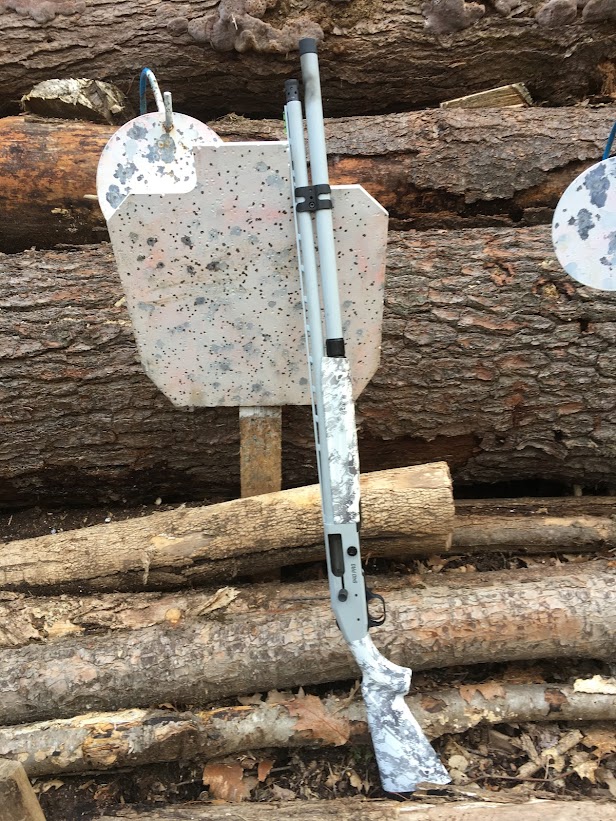 Jordan J. is currently a writer for OutdoorHub who has decided not to write a short bio at this time.