It takes an extraordinary soul to open their home to a dog, knowing that at any moment they’ll have to say goodbye. Hospice fosters live for the experience. Where many of us turn away because the heartbreak is too much, some people open their homes and their hearts to dogs who need love in their last days over and over and over.

Two years ago I had the pleasure of making Kay Jones’ acquaintance. Kay came to iHeartDogs’ attention when she took in a dog with low expectations, and saw her blossom into a true miracle.

Brad and Kay Jones were experienced fosters. As puppy raisers for Canine Companions for Independence, they were used to falling in love with pups knowing that they’d see them off soon. But their fostering journey took a turn when Kay fell in love with a senior pup she saw online, and she and Brad knew that they were the ones he needed.

“He was severely emaciated, had some kind of trauma that made it almost impossible for him to walk anymore and he was mostly blind. I see sad stories every day on my timeline, but there was something about this old guy that just grabbed my heart and wouldn’t let go.”

Kay and Brad gave Beau a whole life’s worth of love in the 10 short days that he was with them, and when it came time to say goodbye, they were there as he took his last steps over the Rainbow Bridge. Even through the heartache, Kay knew that Beau was not the last hospice foster she and Brad would love. She knew that their hearts would heal, and that someday they would be ready to show and old dog what it was like to be loved. However, we know that life doesn’t always work on our own schedules. Not long after Beau left them, Kay spotted a sickly, senior dog who was in desperate need of a family to love her in her last days. Mary Lou’s owner, who was over 100 years old, could no longer care for her. She was riddled with joint and skin issues, as well as other problems caused by neglect. At an estimated age of about 15, Mary Lou wasn’t expected to stick around too much longer. Even with an already broken heart, Kay couldn’t say no when she knew this dog needed her. 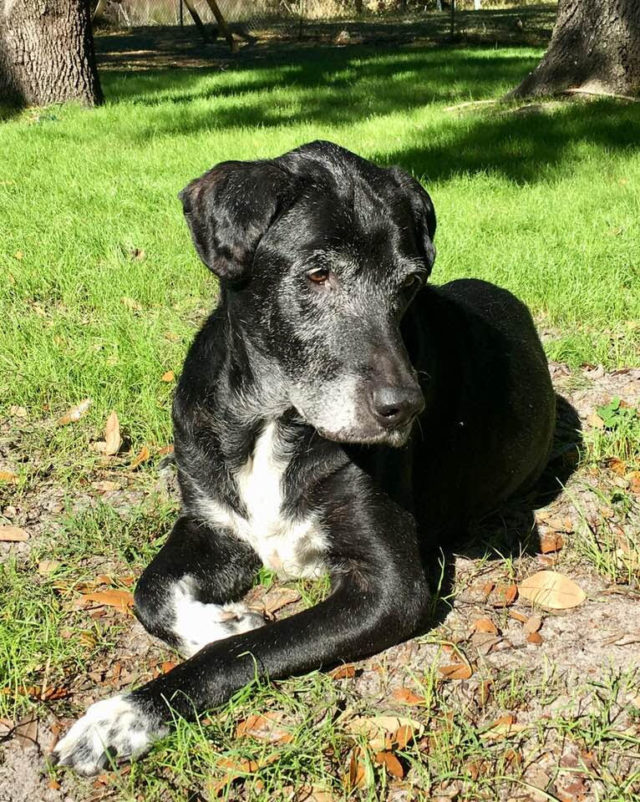 With zero expectations, Kay took Mary Lou to a vet to ease her pain. Her nails were trimmed, she was put on steroids and supplements to make her more comfortable, and she was given a quality diet and a daily, healthy dose of love. Kay only hoped to give Mary Lou a little comfort and joy, but Mary Lou was more spirited than anyone expected. Soon, Kay and Brad saw a change take place. Mary Lou, who could barely walk at all when they met her, began to trot. And jump, and dance, and play!

Mary Lou, who thought nobody would live more than a few days, made it much, much longer than that! When we spoke to Kay in January 2018, she was a much happier, healthier dog than any hospice foster might ever become.

In early January 2020, we heard from Kay again. She let us know that after nearly 2 years of defying every expectation, Mary Lou had passed away in December 2019.

“I am so very sad to tell you that Mary Lou (AKA Moo) crossed the rainbow bridge on December 1st, just one week shy of her two year anniversary with us. Her back end just stopped working and she told us she was ready. It is impossible for me to articulate how much we miss her and how deeply she was (and still is) loved.” 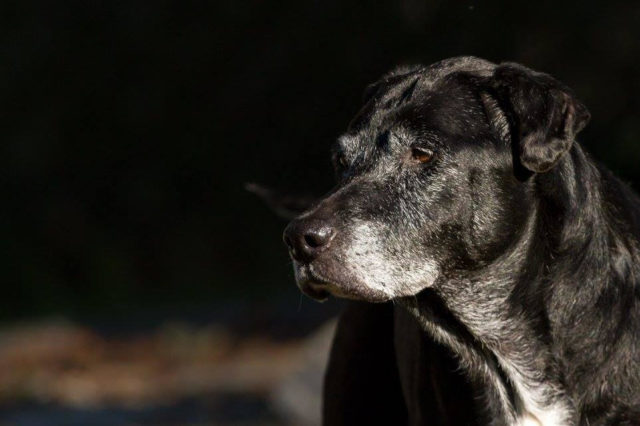 Thanks to Brad and Kay, Mary Lou had two years of love and care she might never have known. And though they knew that it would end in another heartbreak, they never hesitated to let her in.

Like Beau, Mary Lou left her mark on their hearts – which never stay closed for long, if at all. Kay tells us that, again, she planned to let the ache pass before thinking about taking on another hospice dog, but yet again, the right dog was ready before she thought she would be!

“My husband and I had decided to take some time to allow the grief to settle before we looked for another hospice dog. The universe (or perhaps it was Moo herself) had other plans.

“My Facebook feed is full of stories of dogs in need, and it breaks my heart for each of them. But one look at Esther’s face and my heart said loud and clear “That’s my dog.”

After a trip to visit their son for Christmas, Kay and Brad returned home to meet Esther. She had been found treading water in a lake. She had terrible skin and eye infections, and most of her fur was gone. What she had left was sparse and in patches. Veterinarians determined that she had given birth to several litters throughout her life, and it’s thought that she may have been used for breeding, and then dumped when no longer wanted.

Esther would need a lot of care, medication, and attention. Where other people would consider it too much work, or too painful to try, Kay’s heart claimed the poor pup the moment she saw her. 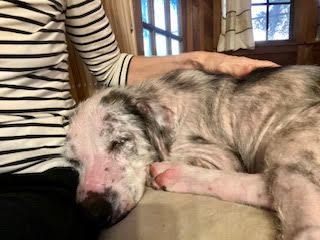 Further examinations from a vet found that Esther likely had a lung disease, but Kay is prepared to fight every obstacle with her.

“It certainly doesn’t seem to be bothering her at this point so we are not going to let it bother us either. That’s the thing with these hospice dogs. We check every expectation we have of them at the door and let them tell us what they need and want. Time will tell with sweet Esther. “Her vision and hearing are not great but, it’s too early to tell how much of that is she’s just so physically traumatized that she can’t spare any extra for sight and sound right now. I remember we thought Moo was mostly deaf and blind when we got her but it turned out she just had all she could do to survive. Once we got her healthy again she saw and heard much better than we thought. Hopefully the same will be true for Esther.”

Esther settled in, and Kay and Brad gave her a new name – Gracie. Like any beloved dog, Gracie found her place in the home, claimed her favorite human, and is becoming another miracle that the Joneses can add to their scrapbook! 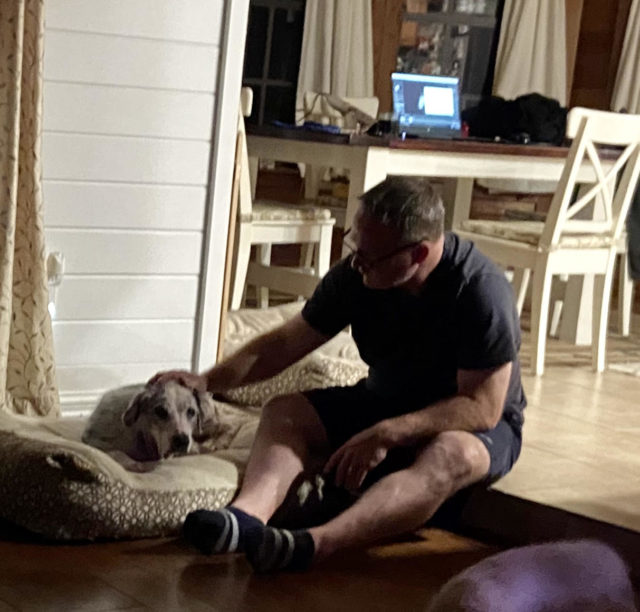 “She is sweet and funny and we are crazy in love with her. She has a hard road ahead of her. She has a host of other problems as well… no coat to speak of, terrible ear infections that are not clearing up as they should, arthritis, poor eyesight and hearing. But yesterday she met Brad at the door and wagged her tiny little tail nub at him and then gave him a kiss. There is life left in this old gal and we will help her find her joy again.

“Stay tuned as I think her transformation is going to be even more impressive than Moo’s was!

“The changes in her physically are profound. Her coat is coming back in so quickly that I wear if it is quiet enough I can hear her hair growing.”

Kay and Brad Jones are showing us that the little time we have with dogs will always be worth the pain they may leave us with. They’re turning their heartache for the dogs they lost into hope for the ones they can still help – and their compassion is awe-inspiring.

“So many people ask us ‘Isn’t it hard?’ and I confess, that question stymies me. Of course it’s hard. It’s supposed to be hard. If it’s not hard, you’re not doing it right. But, with apologies to Tom Hanks, ‘It’s the hard that makes it good.’ Besides, when did hard become an excuse to not do the right thing? 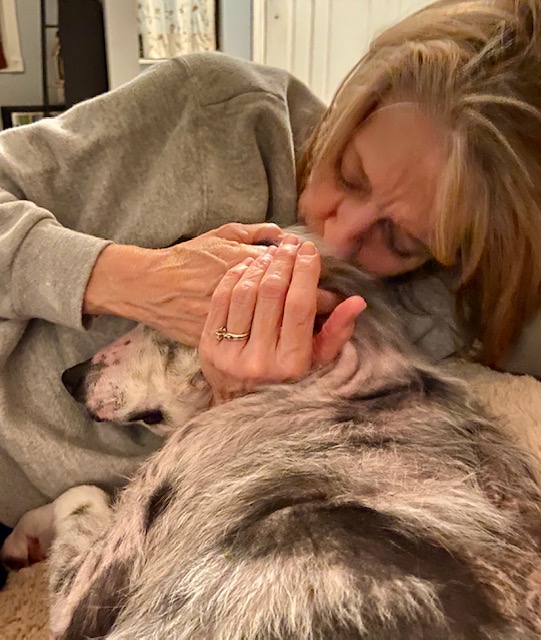 “It’s refreshing to us to have someone understand that what we get out of this FAR outweighs what it costs us. These dogs bring so many gifts with them. They teach us patience, and acceptance. They show us every day how to revel in the good and bear the bad with grace. In this day and age of constant stress and worry they model for us that it is never too late to change the rest of your life and that despite all odds, happy endings are indeed attainable.

“And boy oh boy, is Gracie teaching us. She is astounding.”

Photos provided by the Jones Family