The Kletterzentrum in Austria hosted back-to-back IFSC Paraclimbing, Boulder, and Lead World Cups this year. It was a week slammed with phenomenal talent, lots of try-hard, and several historic moments.

For avid fans of the climbing comp scene, Innsbruck 2022 did not disappoint.

The IFSC Paraclimbing Lead World Cup ran back-to-back with the IFSC Boulder and Lead World Cups, packing in a lot of exceptional climbing from tip to toe.

Here’s a little rundown of the past week’s Boulder, Lead, and Paraclimbing World Cup events.

The climber who achieves the most tops and/or zones in the fewest attempts wins.

Grossman (USA) has been a bouldering tour de force this year. With four tops (final hold on a boulder) and four zones (marked holds elsewhere in the problem that count towards), the 21-year-old Coloradoan bagged her fifth IFSC gold medal of the season. In doing so, she became the women’s 2022 IFSC Boulder World Cup champion.

And rounding out the top three was seasoned comp climber Miho Nonaka (JAP). Nonaka managed two tops and two zones to secure bronze — her third podium of the season.

Rising crusher Colin Duffy (USA) smashed through the men’s final round with three tops and four zones. A post-finals interview revealed that the victory even took him by surprise. “I was counting attempts in my head,” he told IFSC, “I started to realize that I had won the competition, and I was in shock. I still am in shock!”

Until Thursday night, the 18-year-old Olympian’s highest World Cup placement was third at the 2021 lead comp in Villars.

The Innsbruck Lead World Cup kicked off with qualifiers on Friday, June 24, and wrapped up Sunday evening. It was the season-opening event for IFSC sport climbing, and things got off to one helluva start.

Lead rounds feature a single sport route roughly 50 feet tall and overhanging. Each hold on the route corresponds to a number, with 1 being the closest to the ground. Competitors are limited to a single attempt; if they fall, their attempt is over.

One word aptly describes the women’s field at Innsbruck this year: stacked.

Janja Garnbret (SLO) made a highly anticipated and stunning return to the World Cup scene following a months-long hiatus. Notably, the 23-year-old is climbing’s first female Olympic gold medalist and the sport’s most decorated competitor of all time.

Semifinals saw five women top the route. That rate of success in World Cup eliminations is rare, making for an uncharacteristically tight competition. Eight women made it through to the final round, including fine Olympians: Garnbret, Brooke Raboutou (USA), Jessica Pilz (AUT), Lara Rogora (ITA), and Seo Chaeyun (KOR).

Finals, however, was noticeably stiffer that semis — not a single female competitor found the top. Nonetheless, Garnbret secured another World Cup title by advancing significantly further up the route than anyone else. Her winning score of 39+ exceeded the next-best performance by 12 points.

Seo claimed second place with a score of 27+, which she reached with 2:41 on the clock. Raboutou finished in third, with the same score of 27+ but a slightly slower time of 2:52.

“I love hard routes, especially after semis as it was too easy, so we got something completely opposite, probably the hardest route I’ve ever climbed on the World Cup circuit,” Garnbret remarked. “It was amazing, and I hope this [kind of route setting] continues this season.”

As previously noted, Duffy had just landed his first World Cup title in the men’s boulder comp earlier in the week. By Sunday night, the phenom doubled his gold medal count and thus made men’s IFSC history.

Duffy’s score of 38+ ​​narrowly bested the 37+ points notched by Ao Yurikusa (JAP) and Jessie Grupper (USA). Yurikusa took second place thanks to his rapid time of 3:14. Grupper, who spent 4:28 on the route, took third.

“Coming into this competition, I was pretty unsure how bouldering would go, and with the start of the lead season, you don’t’ know how fit everyone else is,” Duffy said following his win. “But I was excited to compete here in Innsbruck, and things have just gone magically for me.”

Here are some of the notable results from the Paraclimbing Lead finals. 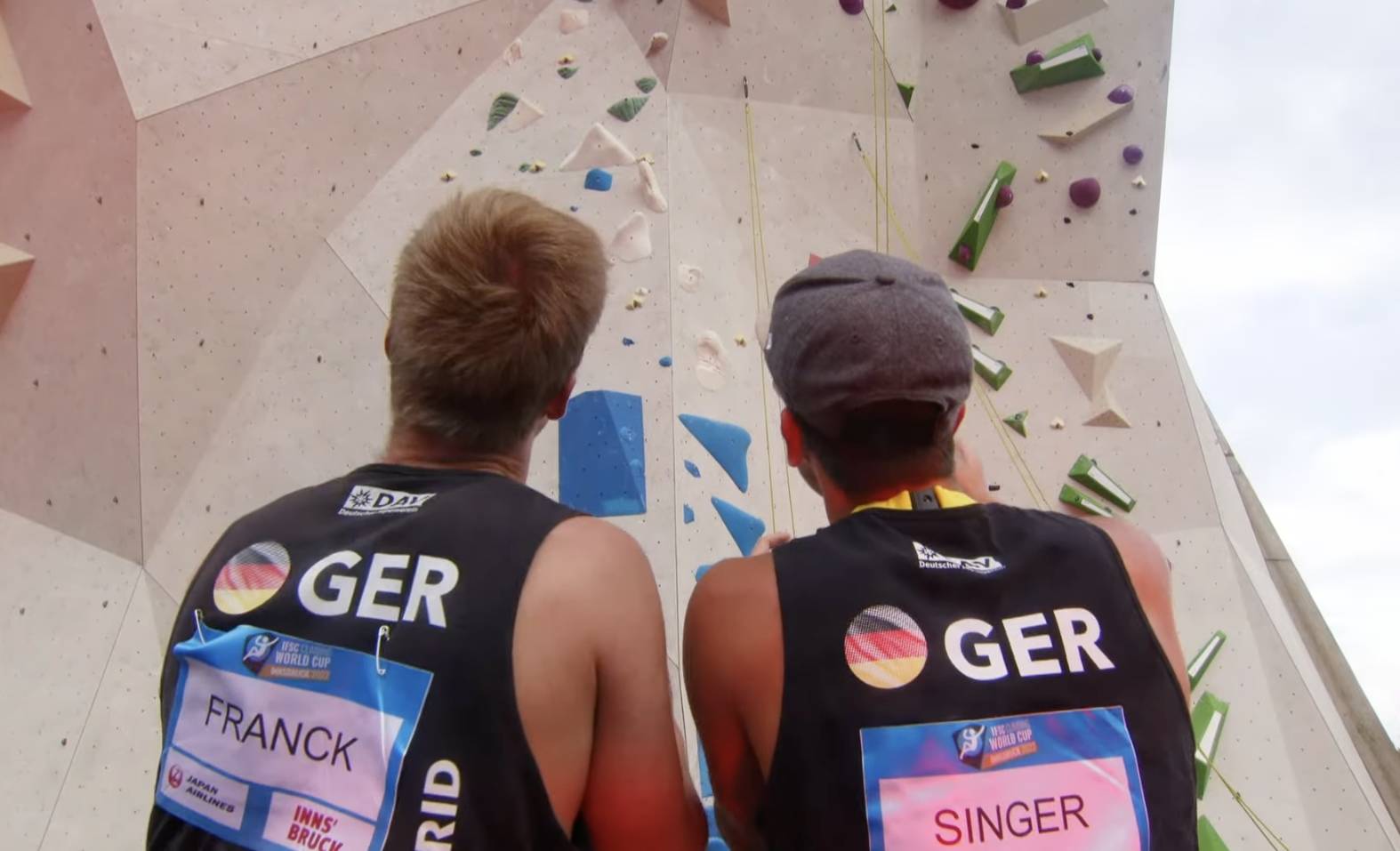 In the men’s RP1 category, Germany’s Korbinian Franck and Florian Singer placed first and secondrespectively, scoring 43+ and 43 in a tight race on a notably difficult route.

The most exciting comp of the World Cup was possibly the men’s AL1 final: in which three Austrian athletes took the podium in their home turf. Two-time World Champion Angelino Zeller ranked first with a score of 42, winning his second gold medal of the season, with teammates Markus Pösendorfer and Daniel Kontsch ranking second and third, respectively.

In the B2 category, Japan dominated the podium, with four-time world champ Aita Sho topping out and placing first, and fellow Japanese climber Hamanoue Fumiya taking second, with a score of 53.

Overall, the USA won one gold and one bronze for the men.

In the women’s AL2 category, four-time World Champion Lucie Jarrige of France placed first with a top. Australia’s Sarah Larcombe placed second with 37, with Hannah McFadden of the USA closely placing third with 36.

Overall, the USA won two silver medals for the women.