Since the 90s, the digital camera has entered our lives as a unique, practical product that no one had experienced before. Despite the 640×480 image size and very simple design of the first cameras, their innovative capabilities were admirable.

In the early stages of the digital camera industry, of course, the expectations and offerings were modest. Even though the devices had primitive technical features that would be beaten by toy cameras today, it was an innovation for anyone to be extraordinary to see the resulting photos on a screen just moments after they were captured.

The rear display, which is now ubiquitous in digital cameras, was not present in the first cameras. In 1995, Casio engineers revolutionized the QV-10, adding an LCD screen to the camera as an essential and indispensable feature. It hit the shelves as the world’s first consumer-grade LCD-screen digital camera and had a TFT 1.8″ (ie 46mm) screen.

This screen was an innovative, bright window into the digital world and the future, and the Casio QV-10 deserved a huge round of applause.

In that same year, the Ricoh RDC-1 was produced with an optional 1.8″ display. The important thing was the presence of a screen, although the image quality was too low-resolution to compare with today’s screens.

In 1996, Casio announced the QV-300 with a 2.5″ screen, and the screen was quite large for that period. Other manufacturers have also added LCD screens to their cameras.

In 1997, the variety of brands increased, and with the exception of a few models, no screenless cameras were produced. The cameras produced this year ranged from 1.8″ to 2.5″ screen sizes. Especially this year cassette analog cameras; 8mm, VHS-C system, and MiniDV system cameras have also started to be equipped with LCD screens.

In 1999, the screen sizes were almost the same as the previous year and no change was felt.

Although more-energy-efficient and better-quality screens started to be produced in 2000, the screens added to camera bodies, unfortunately started to get MB.

There was a huge emerging market for digital cameras and peripheral equipment clearly on the horizon. Out of the still world of analog cameras, a new world of possibilities was opening up. It was clear that there would be a great revival in photography and that a crazy production and consumption period was nigh.

Starting in 2001, camera model groups began to be planned and the logic of model control became clear. Thus, production strategies suitable for the future potential size of the digital camera market began to become clear. With the ever-evolving technology, cameras with increased or limited features started to be produced according to different needs, and detailed plans were made for their production in the future.

Models were designed in accordance with the needs of different consumer groups determined by research. In order to emphasize the “new and innovative” perception of each new model, new developments and technical features were added to the predecessor model. Through these advancements, however, the main displays continued to remain small for some reason.

The modest 2.5” screen size that a compact camera had in 1996 was still absent even on DSLR bodies nine years later. It remained at a maximum size of 2.5” until 2005, and from this year, bodies with 2.7” and, rarely, 3” screens began to appear.

Cameras with tiny 1.5″ screens were still produced by well-known brands that year as well — these were of course compact and inexpensive models. Sony, Kodak, Canon, Lumix… People who bought such cameras were supposed to have good eyesight. It would be nice if it was sold with a magnifying glass to see the small screen. 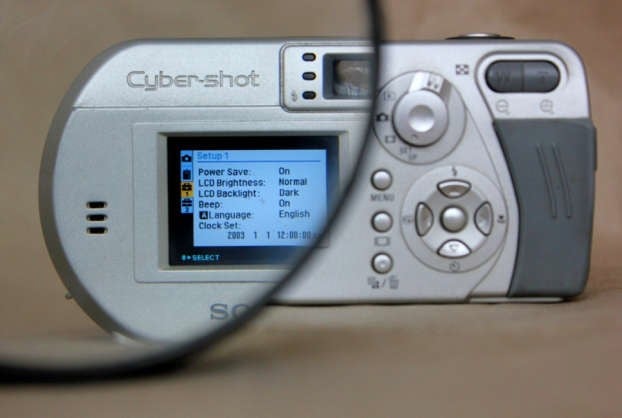 All brands produced these cheap and simple models that can now be considered toys with tiny screens. It was a pity that all well-established brands were caught in this trend. Also this year, Sony produced the Cyber-shot DSC-N1 with a large 3″ screen.

While image sensors and processing power have improved, the screens have also improved, but they have seemingly remained a secondary consideration when it comes to their size and whether they adequately meet the needs of users. I do not think that small screens were preferred purely because they consume less energy, since battery technology was also developing. I believe it was purely a production planning strategy.

If someone were to pick up a Canon 10D and a Nikon D100 these days, the first thing they would say is that the screen is very small — the first thing that catches their eye in the perception of an “old camera” is the tiny display . If these cameras had a 2.5” screen, perhaps the person’s reaction would instead be: “The camera is old, but the screen is of acceptable size and I can still use it comfortably.”

Each new camera model in a camera line usually has a display that is equal to or larger than the size on its predecessor, but occasionally we have also seen more limited features and smaller screen sizes in a newer model. For example, the Fujifilm Finepix Pro S1 screen was reduced from 2″ to 1.8″ in the S2 Pro, and the screen shrank from 3″ in the Nikon L22 to 2.7″ in the Nikon L23 model. In fact, the number of megapixels in this model was reduced from 12MP in L22 to 10MP in L23.

If they had done the model control on the cameras without reducing the screen size, even today, old model cameras could be used more effectively by many photography enthusiasts. The consumer could be content with those models for a longer period of time without being directed to buy new models. (Of course, this understanding is contrary to today’s production and consumption system and habits).

In other words, the next camera model was produced as preferable to the previous model in terms of the total value, while the small screen was preserved as a conscious choice. The size of the screen was restricted for almost a decade to increase the appeal and affordability of models that would be produced much later. Despite the competitive environment in the camera industry, there seemed to be a commercial consensus of all manufacturers about bigger screens to later leaving models.

Every manufacturer was planning the next step, the next year, and the next decade, but little did they know that smartphones with large screens could one day approach DSLR quality, take over the world, and crash the photography party.

About the authorAkil Alparslan is a photographer and illustrator. He spent four years drawing 1,000 film boxes to preserve designs lost to history. You can find more of his work on Flickr.