A wildlife photographer was in a wildlife reserve in India when he spotted a crocodile father giving a ride to over 100 babies on its back as it swam across a river.

Wildlife photographer Dhritiman Mukherjee is always on the hunt for never-before-seen photos or images of endangered wildlife, and both those objectives were met when he came across the unusual sight of the gharial, an Indian crocodilian, guarding a large swarm of its young .

“I am making it clear that I am not an artist,” Mukherjee tells PetaPixel over a video call from Kolkata, India. “The difference is that the artist works on wildlife to satisfy an artistic ambition or artistic goal. I use it to achieve my scientific goal — for conservation.”

The award-winning photographer, who has been working in the field for 25 years and is typically out for 300 days each year, had traveled to India’s National Chambal Sanctuary in June 2017, a little less than 200 miles southeast of the capital city of New Delhi.

The mission was to capture images of the highly endangered gharial, whose maximum population is concentrated in the Chambal River in the sanctuary. Mukherjee had been patrolling for weeks when he came across the scene one morning. 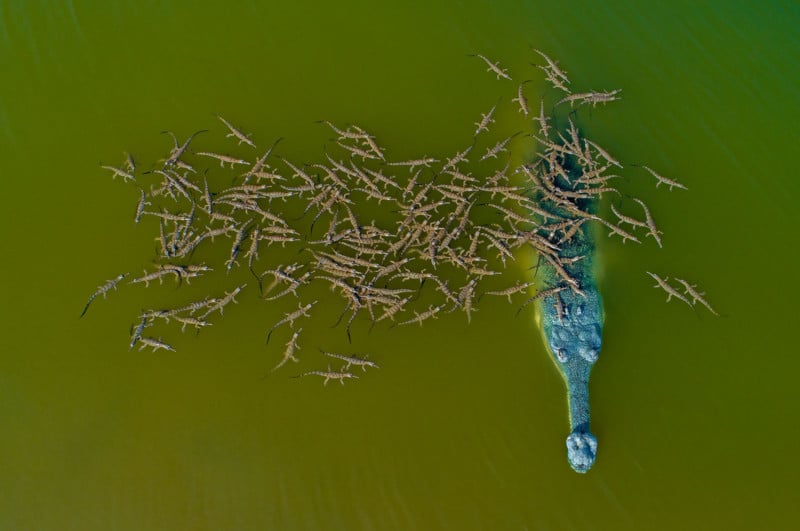 Mukherjee says the photo opportunity was not the result of pure luck but rather having good connections to experts in the area.

“I have a very good local network,” he says. “I keep getting information from the local people, scientists, naturalists, and forest department officials. And this was not my first visit to the region. I have been here a few times…I keep going there. Chambal has the maximum population of gharials as of now.

“This was a big mature male, 16-17′, quite known [to forest officials] and had mated with 7-8 females. The kids you see on his back are from multiple females.” 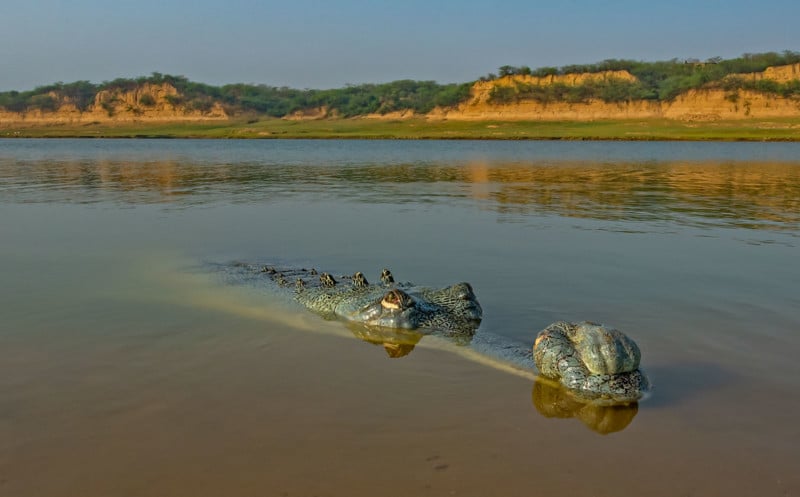 Crocodiles carry their young in their mouths, but the gharial has a very narrow snout, making that impossible. Hence, the hatchlings must cling to the head and back, which provides both protection and a close parental connection.

The photographer tells us that gharials, including males, are very shy and stay away from humans. However, when the male is guarding his young hatchlings, he can be very aggressive and will give charge if the photographer goes too close to the riverbank. Many of Mukherjee’s photos that day were shot with a 70-200mm camera lens from a safe distance. 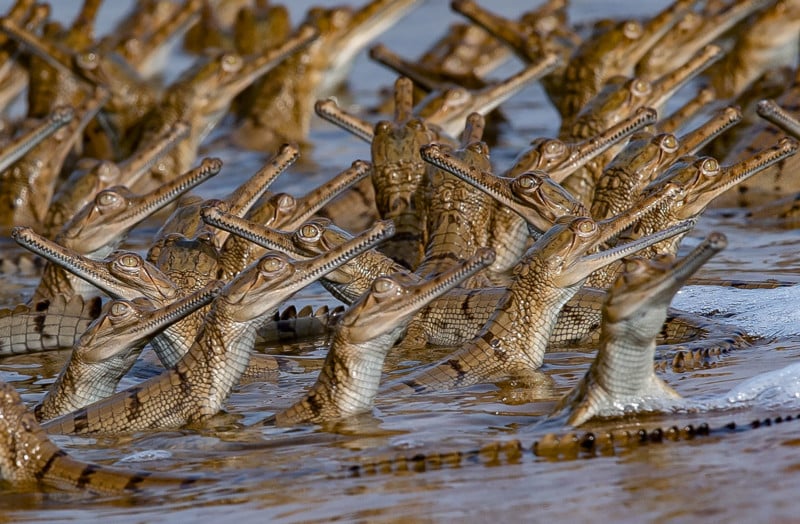 What is a Gharial?

The gharial (Gavialis gangeticus), also known as the gavial, is a fish-eating member of the order Crocodilia, found primarily in rivers in India and Nepal is among the longest of all living crocodilians reaching lengths of up to 20 feet (6.1m). The “true” crocodile, alligator, caiman, and gharial are all members of this order. 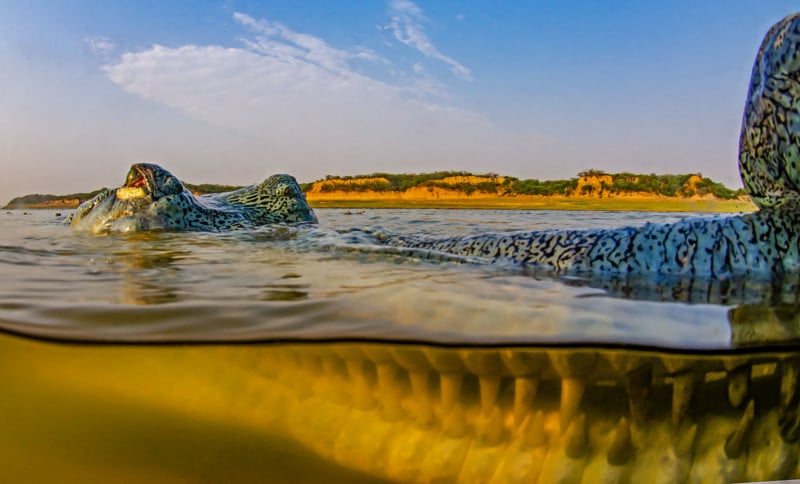 Upon reaching sexual maturity around the age of 11, male gharials grow a hollow bulbous nasal protuberance at the tip of the snout. This protuberance resembles an earthen pot locally called a “ghara,” hence the animal’s name. This device allows the male to amplify sounds and emit a hissing call that can be heard over 200 feet (61m) away. 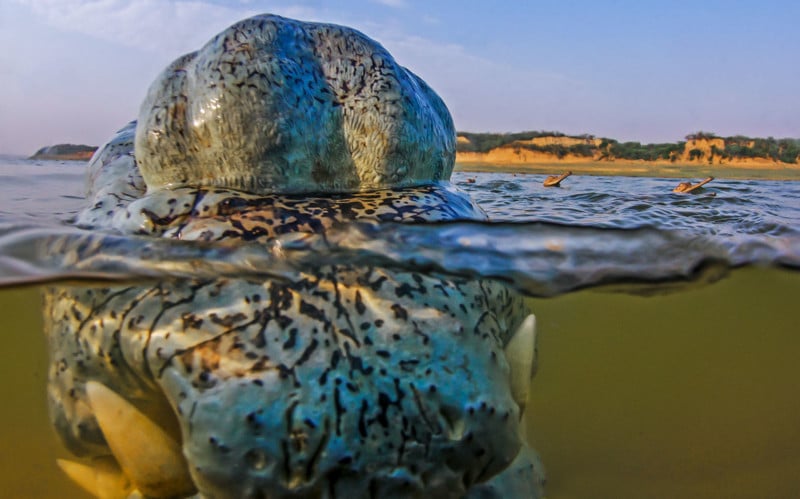 These prehistoric-looking freshwater beasts probably originated in the Early Miocene (23 to 16 million years ago) in the region of India and Pakistan.

“The gharial was a critically endangered species [it still is],” explains the conservationist. “In the last few years, their numbers have come up. Some breeding programs [and rerelease in the wild] have taken place in the Chambal. So, that’s why I selected the subject so that it gets attention from policymakers or concerned people.”

There are only about 650 (this figure is from 2017 and there has been some increase) left in the freshwater rivers of India and Nepal, according to the IUCN Red List.

The gharial population has declined due to the depletion of its habitat by dams which disrupt river flows. Sand is extracted from riverbanks, reducing nesting areas and basking sites for thermoregulation. And there is always the risk of getting caught in fishing nets.

Mukherjee’s Journey as a Photographer

Mukherjee graduated college with a degree in physics and then completed a post-graduate diploma in ecology. However, a 9 to 5 job was not something he could deal with, and he worked with his passion for the outdoors to get into photography. 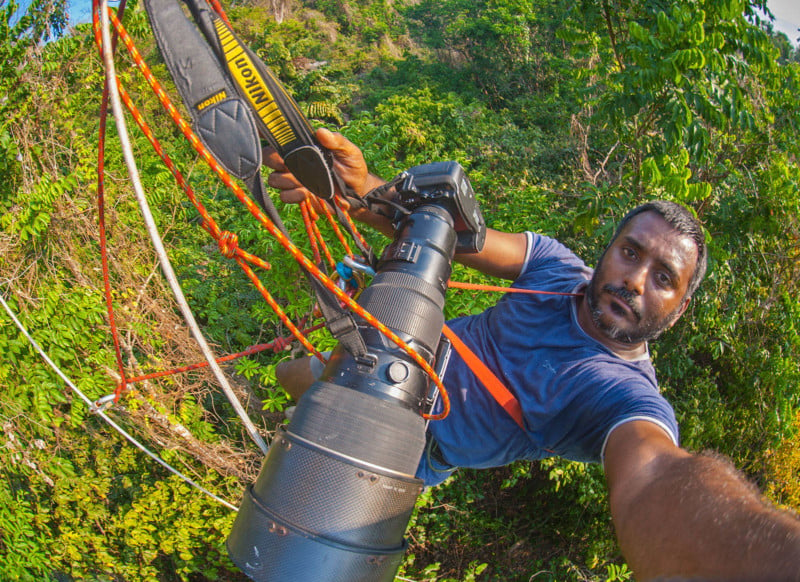 His first camera in 1997 was a Vivitar, but within seven days, he had graduated to a much better Pentax K1000 SLR, an often-recommended camera for photography students. He learned the ropes on it for two years and then it was on to Nikon cameras. He has been a Sony Explorer since 2019 with the luxury of using Sony Alpha 1, Sony 600 mm, other lenses and the works.

Mukherjee has been a full-time wildlife photographer, worked in 40 countries, and now manages to support himself with his passion, but he says that not all 25 years of his career have been equally successful.

“Somehow, I have survived with that [photography],” he proudly exclaims. “It was a difficult journey. With the money from photography, I have worked all over India. I have worked in 40 countries. I do a lot of underwater shooting. I have dived under the ice in Antarctica, and I have dived in Greenland and Iceland. I have climbed a volcano in the Congo. I have dived with anacondas, crocodiles, sharks, and orcas.

“I don’t see photos as good or bad but rather how different they are from the [other photos taken in the] past. My advice to budding photographers is ‘Do what is not done. What is done, no one needs to see it again.”

The conservationist adventurer always shoots in RAW, selects in Adobe Bridge, and his Photoshopping of an image is done “in 40 seconds” as he tries to take better photos in the field. 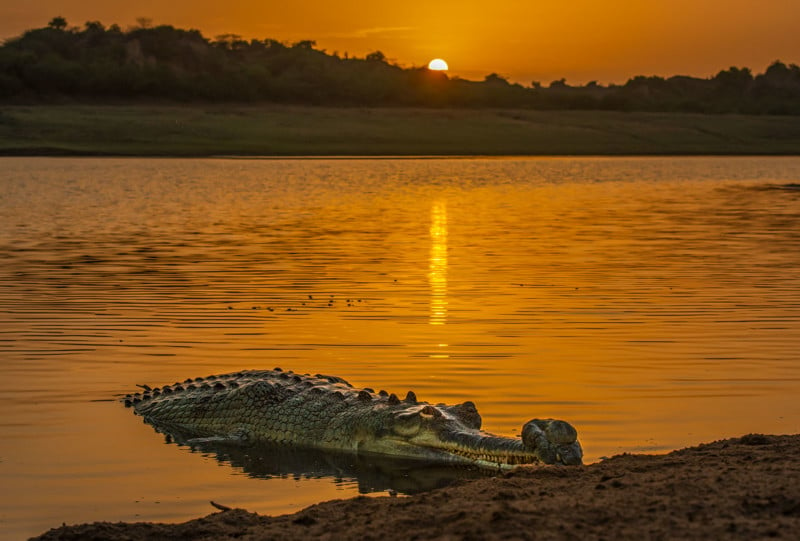 Mukherjee is happy that his photo of father gharial doing his parental duties of taking care of the family has made an emotional connection with viewers. He believes this type of exposure and support from the people is necessary for bringing a species back from near extinction.

About the author: Phil Mistry is a photographer and teacher based in Atlanta, GA. He started one of the first digital camera classes in New York City at The International Center of Photography in the 90s. He was the director and teacher for Sony/Popular Photography magazine’s Digital Days Workshops. You can reach him here.