The Lexus LX600 wears many hats, be it people carrier, off-roader, or luxury cruiser.

The Toyota Land Cruiser lives on in the United States, albeit with a luxury bent, in the form of the 2022 Lexus LX600. Built on Toyota’s global GAF platform, the fourth-generation large Lexus SUV carries the same bones as the latest Tundra and Sequoia. And, indeed, the Toyota Land Cruiser in the parts of the world where the iconic overlander is still sold.

Lexus is, first and foremost, a luxury brand. And yet, the 2022 Lexus LX comes with a combination of specifications and modern tech to make it a potentially potent off-roader.

But, if you prefer, just think of it as a large SUV, with lots of space for people and stuff. Not to mention a capacity to too big recreational toys around — up to 8,000 pounds worth. Or, perhaps, you want an uber-luxury land yacht, with space for but a few while providing extreme levels of comfort. If optioned correctly, yeah, the LX600 plays there too.

That’s a wide breadth of strengths, to be sure. And yet this most recent LX adapts and makes a case for itself for each and every one of them. Well, almost every one, which brings us to this particular example you see here.

This is a 2022 Lexus LX600 F Sport, one of two new trims added to the LX this year. F Sport is the brand’s nomenclature for “sportier version of a thing.”

And, at first glance at least, this LX has the things to make it such a thing: 22-inch forged alloy wheels, adjustable shock absorbers, and Torsen limited-slip rear differential. All that pairs nicely with a 409-horsepower, 479 pound-feet of torque, twin-turbocharged 3.4L V6.

On paper, at least, it’s understandable to think that the Lexus LX, at least in F Sport trim, wants to be a sporty SUV too. Alas, physics still carries a lot of weight here and speaks disapprovingly of chucking around a high-center-of-gravity, nearly 3-ton mass through a bunch of corners at high-lateral G. Despite an “F Sport tuned suspension” and rear anti-roll bar, bluntly, physics says “no.”

Wade Through More Than 2 Feet of Figures

Off-road worthiness starts at the frame. The GAF platform is a body-on-frame piece — a fully boxed hunk of metal built to withstand all the shenanigans of full-size truck and SUV buyers.

From there, Lexus attached the body such that you get at least 7.9 inches of ground clearance. And, in the case of the F Sport, 8.3 inches.

In its highest setting, the LX600 sports a respectable 27.4 and 26.3 degrees of approach and departure angles, respectively. You can also traverse up to 27.5 inches of water.

The drivetrain helps too. The 2022 Lexus LX 600 comes with full-time four-wheel-drive and a two-speed transfer case to give you low-speed, high torque options. And that ties into another chunk of technology called multi-terrain select, or MTS, which uses the braking system, drivetrain, and variable suspension controls to help you along your path, be it dirt, sand, mud, deep snow, or rocks. Or put full trust in the system and select auto.

But we’re still not done with the ones and zeros, as you have a low-speed, off-road cruise control of sorts called Crawl Control, which also manipulates the same systems as MTS. And, to give you a sense of the speeds we’re talking about, it only works in 4Lo.

You also get the self-explanatory Downhill Assist Control. And, to keep sight of it all, a multi-terrain monitor. This monitor uses four different cameras mounted on the LX, to eliminate blind spots and give a keen eye to what’s exactly in front, to either side, or behind you.

To keep all those wheels turning, Lexus mounted up a more potent version of the new twin-turbocharged 3.4L found in the 2022 Toyota Tundra. With a bit of tweaking, the LX gets an additional 20 horsepower to peak at 409.

All the above is bolstered by a 10-speed automatic transmission, which gives a nice, broad ratio range, with plenty of small steps in between. In other words, you are never far from peak outputs of this new turbocharged V6.

Altogether, Lexus claims the LX reaches 60 mph from rest in 6.9 seconds. And yet, you’ll cruise on the highway spinning well under 2,000 rpm.

Displacement downsizing and extra gears also help fuel economy. Admittedly still not great, the new LX manages 17 mpg in the city, 22 mpg on the highway, and 19 mpg combined using a gallon of gas.

That is, however, a massive improvement over the outgoing powertrain, which could do no better than 12 mpg in the city, 16 on the highway, and 14 combined. Yeesh, you’d have to put a second mortgage on your house to fill the tank! (My first and last dad joke of the review.)

What About My Friends?

Measuring more than 200 inches bow to stern, the LX offers three rows of seating or two rows of seating and an abundance of space, 44 cubic feet worth. No, it’s not as big as a Tahoe or an Expedition. But that just makes it large instead of gargantuan.

You have room, is the point, whether you choose to use it to carry seven people and 11 cubic feet of stuff, five and 44, or two and 64.

Critically, you’ll carry your people and gear in comfort. And that’s despite having a solid rear axle, again like the Tundra.

Again, technology plays a role here. You do, after all, get adjustable shock absorbers and springs, which gives the LX a wide variety of ways to adjust stiffness of the suspension. Indeed, the LX glides over bumps smoothly, all while maintaining an even keel, and yet never feels floaty or under sprung.

You see several more options and adjustments inside. The LX F-Sport offers four-zone climate control as well as heated and cooled seats for the front and two outer seats of the second row. Additionally, the seats themselves are comfortable, supportive, and spacious.

The front passengers also have easy access to a 12.3-inch center console touch screen with myriad controls and an additional 7.0-inch screen just below that for additional information.

I should mention, the third-row seats two comfortably, as long as folks sitting there are less than 4.5 feet tall. This is, after all, one of the smaller super-big three-row SUVs. A body-on-frame one at that. If you load up your LX with seven folks, four of them will be quite comfortable.

But you can take comfort a step further with the new for 2022 Ultra Luxury trim. This LX ditches the third row, swaps out the bench second row for captain’s chairs, and adds a second-row center console to play around with.

Moreover, these seats recline up to 48 degrees, have curved and cushioned headrests, and are heated, ventilated, and massaging.

You also get footrests and the materials in the interior are super-fancy named things, like the “diamond-stitch semi-aniline leather-trimmed seating.” Just be ready to empty $127,845 out of your bank account.

Expensive! I know, but that’s high-end. The LX starts at $88,245, or just a few grand more than the options list on the recently reviewed Rolls-Royce Cullinan. The F-Sport LX you see here starts at $102,345. Still quite expensive, but a touch more palatable than the $127,845 Ultra Luxury trim version.

But if you need a jack-of-all-trades kind of vehicle and have a family, the LX ticks a lot of boxes off your to-do list. Hit the road with your large camper trailer in tow, and keep the crew comfortable with charge ports and temperature controls for everyone.

Then, once the camping site is set, venture off road to a more scenic vista to catch the sunset. And you’ll have space for all of your hats. 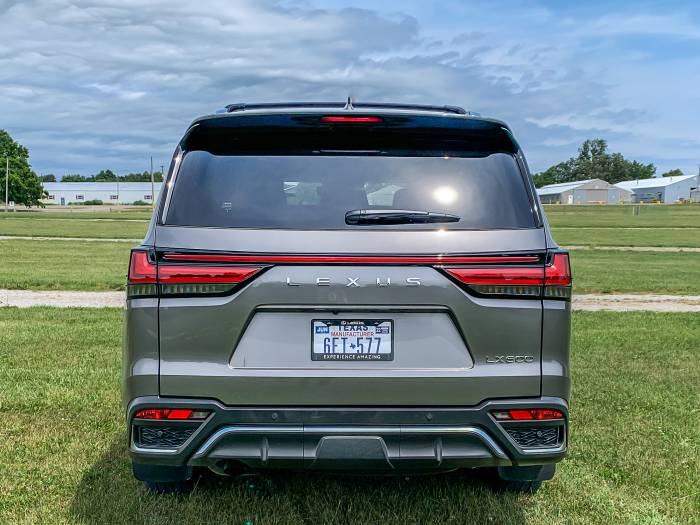 2023 Sequoia Review: Toyota Wrote ‘Badass’ on It in Morse Code. Can It Live Up to the Hype?

Toyota’s Sequoia is getting a complete makeover for 2023 and it’s one badass truck. Just ask Toyota, which spelled that out — in Morse code — on the base of the new SUV’s windshield. Read more…